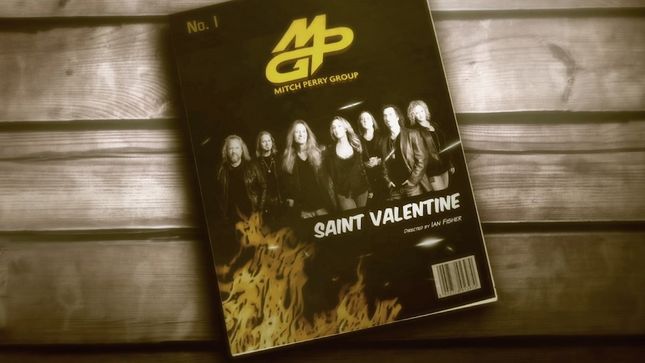 “It’s a tongue in cheek look at how, when Cupid shows up, we don’t always act in our own best interest,” says Perry, writer, producer and guitarist for MPG.

Mitch Perry is world renowned for his guitar playing and a long and prolific career performing alongside legends like Michael Schenker, Edgar Winter, Lita Ford, Cher and Sweet, amongst others. In 2017 Mitch began rounding up some of his favorite musicians. “My original idea was to create a jam band for fun. It wasn’t long before it evolved into something more serious, and this album is the ultimate result of all that work. ‘Saint Valentine’ was originally going to be our first single but the Covid lockdown gave us reason to rethink that idea. Our video director, Ian Fisher, came up with a concept that really illustrated the isolation and hope that we were all dealing with, so ‘Believe’ ultimately premiered first.”

“This album is the real deal” adds drummer Tal Bergman, late of Billy Idol and most recently, Joe Bonamassa. “It’s a great record and I’m proud to be a part of it. I especially can’t wait until we can get back out and play this music live…..the way we we’re supposed to be doing it.”’

On writing the song, Perry says, “The song was one of those gifts from above. I was flying back to Los Angeles from London and knew that I wanted to include a song like this on the album but didn’t have one at the time. I always wear noise-canceling headphones on flights. When we took off this tune just started in my head. I wrote down the lyrics and chord changes and taped the melody on my phone. I knew I had something worth recording so I did whatever I had to do to keep from losing the ideas. The song and all its parts were finished by the time I touched down in Los Angeles.”'

“If this song doesn’t get you going check your pulse,” said Keith England, lead singer on the album, Music Box and the song Saint Valentine. The former Montrose and Allman Brothers vocalist added, “One thing I love about music is its ability to tell a story. Saint Valentine paints a picture of an experience I think we can all relate to on some level.”