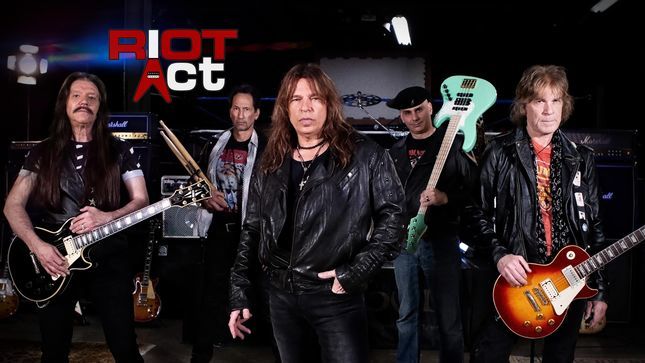 Jimmy Kay and Alan Dixon talked to ex-Riot / Riot Act guitarist Rick Ventura on The Metal Voice on June 13th, 2020. Ventura talked about the passing of Lou Kouvaris and Riot Act's intentions to move forward. As well, he talked about the early Riot days of opening for AC/DC on Highway to Hell Tour, Rush during Moving Pictures, and Black Sabbath on the Heaven And Hell tour with Dio.

On Riot Act's future plans after the passing of their guitarist Lou Kouvaris:

"We are not going to fill Lou's position because there is no point in filling it. The whole concept of Riot Act was to get Lou and myself together and play the old songs from the first three albums and then write new material because we were both the Riot guitar players from the early days, but with the tragic shocking passing of Lou threw us for a loop. A continuing tragedy of Riot members passing, it's just hard to fathom. But, Riot Act is going to move on, we will forge ahead. Lou would have wanted it that way. Don Chaffin (singer) is a pretty competent guitar player and we might have him strap the guitar on for a few key songs that call for that dual guitar, we will see. This is all new."

On Riot for AC/DC on the Highway To Hell tour:

"I remember doing laundry with Angus Young's wife. We used to just hang out side stage and watch Angus roll around the stage, they were just a fun band to watch. Bon Scott was one of the greatest rock vocalists he had such swagger. They had reputations, especially Bon. We were afraid to hang out with them thinking if we hung out we would turn into him. A lot of the stuff on Bon was exaggerated but Bon Scott was the real deal."

On opening for Rush on the Moving Pictures tour:

"I was a Rush fan in the very early days when we first heard we were touring with them we couldn't believe it. What was interesting during our first soundcheck. we looked out up front and it was Geddy Lee. He was just standing there, checking us out. We were freaking out. They were nicest guys, very cool guys. I never hung out with Neil (Peart) but the memory I have is the time when Rush were doing their soundcheck and Neil Peart was late, so they asked our drummer Sandy Slavin to come up and play 'Limelight' during soundcheck."

On opening for Black Sabbath on the Heaven And Hell tour with Ronnie James Dio:

"I was a big Rainbow fan and to tour with Dio and the guys in Sabbath that was unbelievable. I remember being at the hotel and the elevator opened  and Ronnie was there. He was a  sweet human being, so down to earth and great guy. Another time we were at the hotel and the elevator opened up and it was Geezer Butler and Bill Ward in the elevator. Myself and Kip Leming (bassist), we wound up going to Geezer's hotel room and Bill Ward was there, too. They were such nice guys. They talked about all the troubles Sabbath went through in the early days, how management screwed them and we talked about our issues and they were giving us advice. What a cool experience with two legends who were so down to earth. "

Riot Act have released their latest video, featuring a re-recording of the classic Riot song, "Overdrive", which was featured on the band's first album, Rock City. The song is a tribute to the late Lou Kouvaris, who played on the song and the original debut album, and suddenly died due to COVID-19 on March 28.

Guitarist Rick Ventura told The Metal Voice that they will continue to perform and write new material. As for who will replace Lou, the extra guitar duties for now will be done by lead singer, Don Chaffin.

Watch the new video below:

Original Riot guitarist Lou A. Kouvaris - who appeared on the first Riot album Rock City (1977) and wrote songs for Narita (1979) - tested positive for COVID-19 and passed away due to complications on March 28, 2020 in Long Island, New York. He was 66 years old.