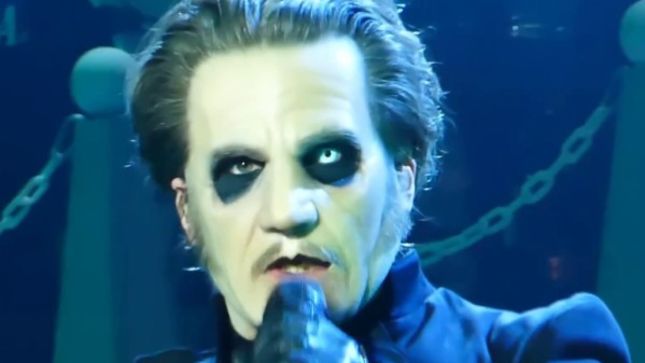 Speaking with Ireland's Overdrive, Ghost mastermind Tobias Forge discussed his rise to fame and what he feels are his greatest accomplishments so far. Following is an excerpt from the interview.

Q: How has it been for you personally, from the success of the album (s), playing to stadiums in the US, and now this tour with Metallica?

Forge: "I have moments where I have to step back and take it all in. You see, I’m not a very ‘in the moment‘ type of person. In fact, I’ve always been very distant and I guess a ‘dreamy‘ sort of person. If I look back on my life so far and I think about how I spent my childhood, I guess this comes with age and it comes from the fact of also being a parent because when you’re a parent, you can’t help to look at your kids from an upbringing point of view where you have to think about our progress.

I found myself asking the question, 'Well, how did we do when we were younger?' [Laughing]. I guess there is a certain amount of reflection you have to do as an adult and now, for me, especially being an artist, I tend to have to think about my life and the journey I’ve had growing up and I’ve come to realise that very little has changed. I have spent my whole life drawing, writing and dreaming about doing all of these things that I’m now getting the opportunity to do.

So, at some point, that dreamy, adolescent loser just like, transgressed into this person who could go back into childhood again. The backside of that is sometimes, I have to remind myself that I’ve gone past the point of wishing to get here, and understand the realisation that this is actually happening. Like today for instance, getting to play this infamous venue (Slane Castle) is huge for me. I’ve known about this place since the ’80’s. I have a bit of a ‘now‘ moment with this today, but what often happens is that I play a certain venue, or meet a particular person and it’s like that moment just happens and I’m looking in from the outside, but afterwards I’m like, 'WOW!'"

Armed with "Faith", the third hit single from Ghost's Grammy-nominated album Prequelle, the band premieres a brand-new webisode, Chapter 7: New World Redro. This chapter first brings the viewer up to date with the Cardinal Copia-Papa Nihil-Sister Imperator storyline and then begins to lay the foundation for more backstory secrets yet to be revealed.

Ghost is spending the bulk of its summer as special guest on Metallica's four-leg WorldWired European Stadium Tour. Leg One saw Ghost playing to more than a quarter-million fans; Leg Two kicked off on June 8, and Legs Three and Four will take place July and August. Ghost will perform at Heavy Montreal on July 27, and then kick off its North American Ultimate Tour Named Death headline arena tour on September 13. 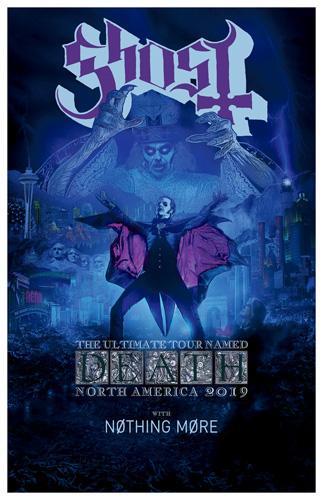 * Twin Temple will support on this date