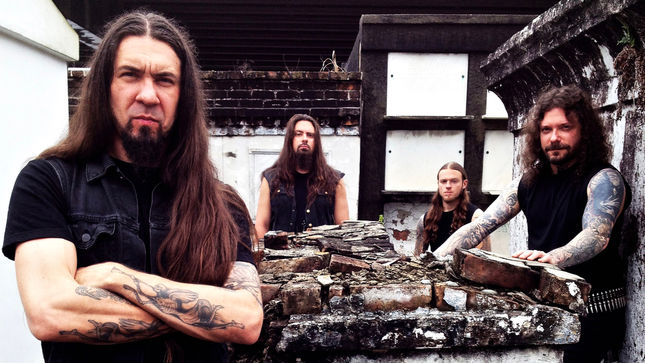 Goatwhore, who are currently wrapping up a tour with label mates Amon Amarth, will play the Fort Worth Metal Fest at the The Rail Club in Fort Wort, Texas at the end of the month before taking to the streets again for a near-three-week North American journey from June 9th through July 1st. Support will be provided by Vancouver metallers, Anciients. See all confirmed dates below. 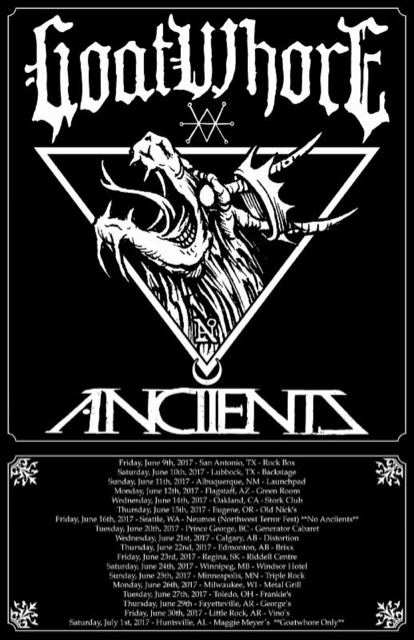 "Working with Rutan was awesome," says Goatwhore frontman Ben Falgoust. "We did some great records with him. But you come to a point where you're like, 'All right. Let's try something new.' It was part of trying to remove ourselves from a comfort zone and a risk thing we needed to take. Plus, we really wanted to hit the essence of where we are live and what better way to harness that than by having our live sound guy involved. Jarrett is knowledgeable with the studio stuff. He also knows how we sound coming out of a PA and we really wanted to get closer to that."

The resulting ten-track, forty-one-minute production - mixed by Chris Common (Tribulation, Pelican) and mastered by Maor Applebaum (Faith No More, Halford, Today Is The Day) - marches in, clutches its listeners by the throat and refuses to loosen its grip until the abrupt conclusion of "Those Who Denied God's Will”. A sonic manifestation of war, chaos, desolation, and emotional conflict, seamlessly bridging twenty years of the band's signature brand of audio venom, it's a record that finds its members at their most accomplished both individually and as a cohesive unit. Guitarist Sammy Duet's dense, sub nuclear riff work and possessed solo blitzes are at their most devastating, spiraling flawlessly and instinctually around drummer Zack Simmons' and bassist James Harvey's hammering rhythms, while Falgoust's distinctly commanding roar, his acidic prose, more enunciated than ever before, complimenting the apocalyptic proceedings.

"Each song is a representation of Goatwhore. From day one until now. It really shows our evolution as a band," the front-man reflects."I don't think that this band has reached its peak yet. I mean, I think we're closer now than ever but we're still growing; we're still evolving."

Vengeful Ascension will be available on CD, vinyl (in multiple limited color variations), and digital formats. Various pre-order options are currently available at this location. 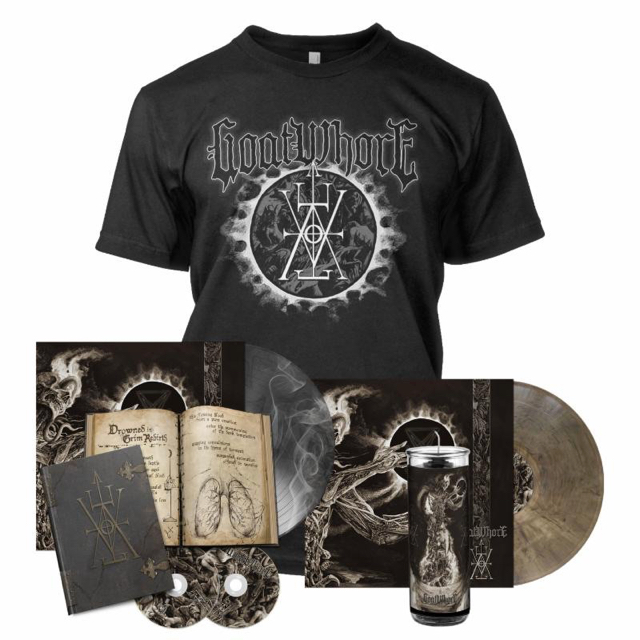 * exclusive bundles with a shirt, plus digital options are also available.

While hardly a concept record in the traditional sense, Vengeful Ascension loosely revolves itself around Luciferian notions in title and spirit where the symbol of Lucifer serves not as a fiendish, all-destroying demon but rather an emancipator or guiding light. It's a theme of struggle and transcendence derived from John Milton's Paradise Lost epic, and one that has appeared, whether directly or indirectly, within Goatwhore works of the past.

"There's that whole idea of Lucifer being the anti-hero," elaborates Falgoust. "He's cast out from this place in Heaven to the depths of nothing. He keeps trying to ascend to the top again but no matter what, there's always this significant force trying to destroy him at any point and banish him back to Hell. If you look at it from an everyday aspect in life, it's the idea of people, hitting the bottom of the barrel or you know, things just aren't going right in life... emotion plays a huge part in how people react. Whether it's based on love or hatred or sadness or whatever, there's always an aspect of emotion that drives people to an extent. So the whole idea of a 'Vengeful Ascension' is built on being at the bottom, working your way to the top, and realizing along the way that there are other facets to the journey aside from just pure retribution. Within negativity there can exist a positive angle as well."

Vengeful Ascension serves as the soundtrack to that luciferious rise straight off with the combative, ritualistic drum onslaught of opening hymn, "Forsaken." Wholly immersive, each track is alarmingly palpable in subject and corresponding execution. The tense, clandestine battery of "Chaos Arcane," based on HP Lovecraft's book Nyarlathotep - a story which attempts to recount the inexplicable sense of fear in expectancy of an unknown evil - conveys that sensation of impending doom through sound in a way only Goatwhore can. "Mankind Will Have No Mercy," a pseudo tribute to Bolt Thrower, seethes under the weight of its own wartime sentiment, while the rapid-fire, punkish urgency of "Under The Flesh, Into The Soul," a first person account of irrepressible resentment, sounds utterly enraged. And with an average runtime of just four minutes, no one song ever overstays its welcome. 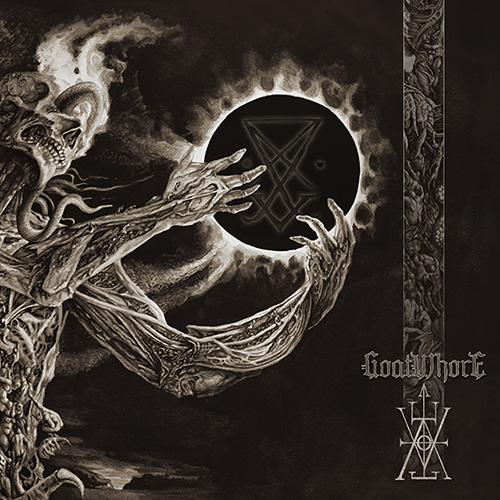 “Forsaken”
“Under The Flesh, Into The Soul”
“Vengeful Ascension”
“Chaos Arcane”
“Where The Sun Is Silent”
“Drowned In Grim Rebirth”
“Abandon Indoctrination”
“Mankind Will Have No Mercy”
“Decayed Omen Reborn”
“Those Who Denied God's Will”