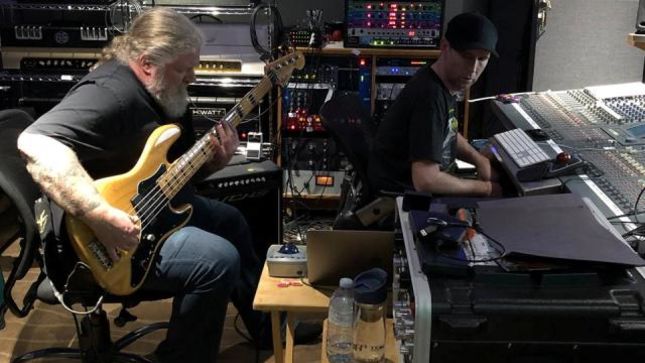 Producer Jason Van Poederooyen has checked in with a behind-the-scenes look at the recording of Imonolith's forthcoming full length debut album, describing the bass rig that was used, the tone, and why.

Jason:  "Behind every great guitar tone is a killer bass tone. I love the sound of a real Ampeg SVT pushing air though a 8x10 cab. We used an Orange Amplifiers 8X10 over the vintage Ampeg. The Orange had more punch and depth. I didn’t push the SVT too hard, just enough to get the right punch. I ran a second amp for distortion. In this case, we used a vintage Hiwatt UK (Established Manufacturer) running through a 4x12 Marshall Amplification cab and a Darkglass Electronics Microtubes B7K Ultra pedal, it was definitely the answer and the right combo for the Imonolith sound. This tone has a nice balance between the distorted and cleaner punchy tones we got out of those rigs. Mics on the Marshall cab were the same as guitars—57 and 421. The Orange cab had a 421 and an old Electro Voice RE-20.

Byron Stroud has a custom 5-string Fender bass that sounds like nothing I’ve ever heard!! It’s a killer bass. Very unique. I was extremely happy with the results of this bass sound. We took our time getting the right sound with the right amps and cabs, and it definitely paid off. There is nothing like the sound of a cranked SVT!"

A video for "Hollow" can be seen below. The single can also be streamed/purchased here.

“Hollow” serves as the perfect introduction to Imonolith, a band whose mission is simple: to write the heaviest riffs, the biggest hooks, and most monstrous grooves. Given the impressive pedigree of each player, they do exactly this and more.

Recorded and produced by Brian Howes and Jay Van Poederooyen (Nickelback, Chris Cornell, Airbourne, Hinder, Daughtry) at Van Howes Studios in Los Angeles, California, “Hollow” is immediately setting the bar high and the best is yet to come.

The band has checked in with the following update:

"The majority of the debut Imonolith album has been recorded! It's sonically sounding incredible and the songs got way more interesting with the producing guidance of Jason Van Poederooyen. There are still some odds and ends we need to do and then we're on to mixing the album!

We would like to thanks Jason Van Poederooyen for taking our sound to another level with his producing and engineering skills. We can't wait to hear this album mixed by him. Everything is natural, so, no DI's on guitars and bass, no auto-tune on vox, and no samples on the drums. We actually recorded the drums to 2" tape, to get the biggest, punchiest sound possible and we think JVP definitely accomplished that!

We would like to thank everyone at the Armoury Studios and at The Beatlab Studio for the amazing recording experiences. Both studios have top notch gear and staff. We couldn't have been more happy with the studios we chose to record in.

Lastly, thanks to all of you who follow us, for your patience and support. We hope the wait will be worth it for you all. Back to recording...." 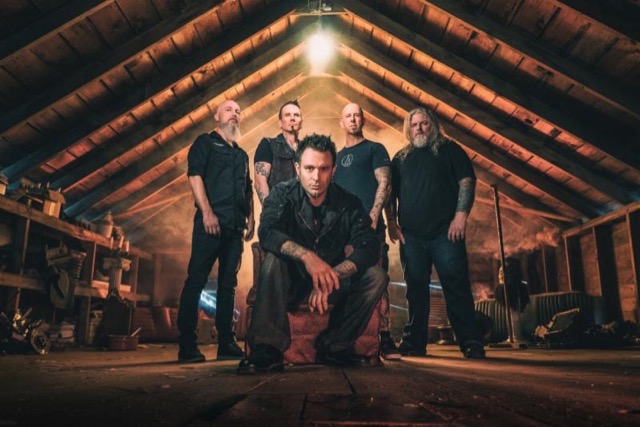 Imonolith was officially formed in February 2018 by drummer Ryan ‘RVP’ Van Poederooyen and guitarist Brian Waddell, although the pair started writing their own brand of heavy music in 2015 whilst playing together in the Devin Townsend Project. RVP and Waddell then went on to recruit vocalist Jon Howard, bassist Byron Stroud, and second guitarist Kai Huppunen, completing a fearsome line-up. The Canadian quintet has since written a mass of highly diverse material, which appeals to everyone from the metalhead to the radio rock fan, and everyone in between.

Since teasing demos and video clips online, Imonolith have amassed a dedicated legion of supporters worldwide, and with the release of the new single, their following is set to expand by the thousands. With their first run of shows throughout Canada announced and big international plans in the pipeline, 2019 is set to be a huge year for Imonolith. 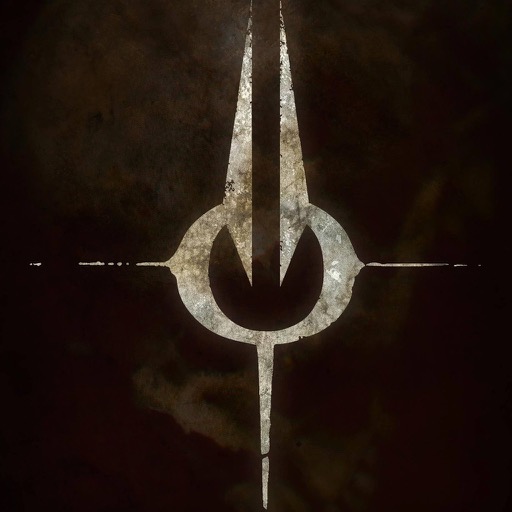