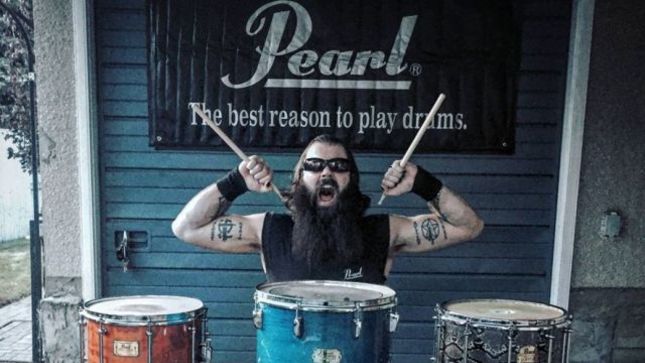 "I am so excited to finally release these exclusive drumming play-through videos that were recorded at one of my most recent drum clinics. This comes at a great time because I have recently joined the Pearl Drums Canada family of Endorsed Artists. A huge thank you to Peter Marunzak and everyone at the Pearl team for supporting me the way I have supported them for over a decade. I currently play Sabian Cymbals, Remo Heads, and Roland Triggers as well.

Here is 'This Frozen Hell' and 'The Sirens' off of Into Eternity’s brand new album, The Sirens, that is now available through M-Theory Audio Records and on Bandcamp, iTunes, Spotify and Apple Music.

Enjoy and Watch It Go!"

It's been 10 years since Into Eternity unleashed 2008's The Incurable Tragedy on Century Media with former vocalist Stu Block, now of Iced Earth. A decade later, it's a new era for the band with their new album The Sirens, which features founding member and guitarist Tim Roth with a new lineup that includes: vocalist Amanda Keirnan (The Order Of Chaos), guitarist Matt Cuthberston (Untimely Demise), bassist Troy Bleich (Planet Eater) and drummer Bryan James Newsbury (Culled).

Guitarist Tim Roth comments: "'Sandstorm' was the second song written for The Sirens. Most of the other tracks are long epics, but 'Sandstorm' is a short, action-packed song that holds plenty of firepower. Amanda did a spectacular job on the vocal melody and even though this song has a nice groove, there are still a lot of blast beats, guitar harmonies, melodic bass playing and shredding solos to be heard. This track also features Rob Doherty (low growls) and Stu Block as guest vocalists, as well as Justin Bender on the outro guitar solo. The song's lyrics were inspired on May 2, 2011 after the USA shot and killed Osama Bin Laden during a covert mission."

“The Sirens”
“Fringes Of Psychosis”
“Sandstorm”
“This Frozen Hell”
“Nowhere Near”
“Devoured By Sarcopenia”
“Fukushima”
“Scattering Of The Ashes Pt. 2”