IRON MAIDEN Bassist STEVE HARRIS Looks Back On BLAZE BAYLEY Era Of The Band - "They Were Bloody Good Albums, In My Opinion" 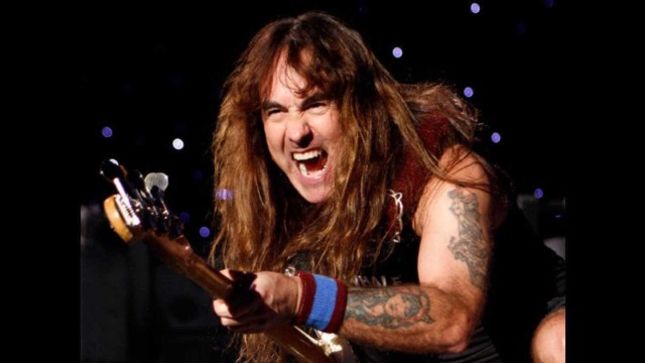 Bayley recently spoke with Ultimate Guitar about his time with the band. In 2019 it will be the 25th Anniversary of Bayley replacing Bruce Dickinson as Iron Maiden's frontman.

Bayley: "Technically difficult - 'Heaven Can Wait.' It's got a very challenging verse in there. It's a lot of words to fit in rhythmically. One of the great things about that song is - as difficult as it is, it taught me this wonderful lesson about phrasing. And I've been able to take that lesson and use it in my work since. So when I think of 'Heaven Can Wait,' there is a direct relationship between learning how to sing that song and (2016 solo song) 'Infinite Entanglement.' There's a direct relationship because the phrasing on 'Infinite Entanglement'. I learned how to do that kind of phrasing and how to put the lyrics and create a melody like that because of singing those songs with Iron Maiden."

I found 'The Number of the Beast' a real challenge. I always really had to dig in, not move around much on stage, really listen to those drums and really listen to what that bass was doing. It sounds simple, but for me 'The Number of the Beast' was a very challenging song to sing live. To find the places where you take your queue, where I would take my breath on each part. That was a very challenging song."

Bayley performed at Hammerfest 2018, held at the Hafan y Mor Holiday Park at Pwllheli, Gwynedd, in North Wales back in March. HRH TV has posted pro-shot video from the show, which can be seen below: