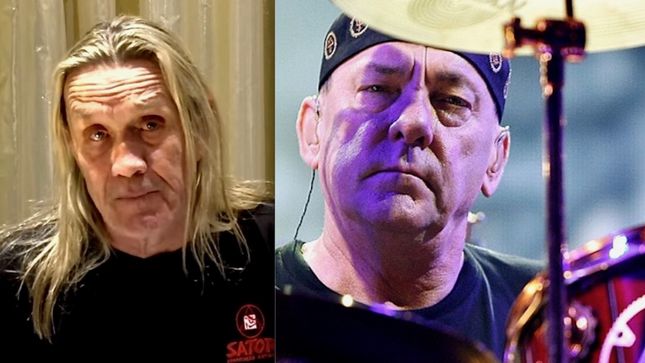 Nicko McBrain spoke out about the passing of Neil Peart, calling the Rush drummer, "a true diplomat for the instrument, a wonderful human being, and a phenomenal player". The Iron Maiden drummer made the comments while talking to eonmusic at the NAMM Show in Ahaheim, California, on Friday, January 17.

Peart, who passed away on January 7 after a three year battle with brain cancer, was recalled fondly by Nicko, who spoke of the one time the pair met.

"I only met Neil once, at a show way way back in the late '80s", revealed McBrain. "We were playing in the same city - i think it was in Philadelphia, Pennsylvania, somewhere like that. They were doing a show, and we went to their show, got to meet them, and I got to sit and talk with Neil."

He continued; "[he was] a wonderful, articulated man. He was quiet, he was very reserved, but when you sat down with him, my impression of him was of a very articulated, very educated kind, and I liked him very much. And I loved his playing."

A GoFundMe campaign has been launched in support of a memorial in Lakeside Park (located in Port Dalhousie, a suburb of St. Catharines, Ontario) for Neil Peart. A message from O'Connor Initiative Inc. founder, Christopher O'Connor, follows:

"The O'Connor Initiative Inc., (OCI) a local non-profit that operates the Port Dalhousie Supper Market and Summer in White community events, proposes this GoFundMe in support of a Neil Peart Memorial in Lakeside Park. If everyone who signed petitions gave $10 we would exceed our goal. Memorials, however large or small, are expensive.

"We acknowledge the merit of the many suggestions on how to honour Mr. Peart since his passing. In order to effectively create an impact we ought to be concerted in our efforts as a local and global community. This fund is to act as a conduit for people from all around the world to participate in the concerted effort to honour Mr. Peart's legacy. This fund is non-specific in nature as to respect the long-term process of creating an appropriate memorial. It is not for our organization alone to propose a singular means of memorial.

"At this time there are many unknowns and we will be seeking collaboration with stakeholders, including the City of St. Catharines, the online/offline community, and of course, Rush and respective family members. It is our hope that there will be a committee of stewards to guide this project to fruition and we hope to enable their efforts through this fundraiser.

"Lastly, we acknowledge that Rush has encouraged supporters to make donations to a cancer research or charity of their choice. If consensus is not reached over an appropriate amount of time by stakeholders OCI will recommend donating the funds to a local Niagara organization in line with the Band's recommendation.

"We ask for patience during this process as there are many moving parts. We will do our best to act in a collaborative and open manner to ensure the most appropriate actions are taken to create something that tastefully honours Mr. Peart."