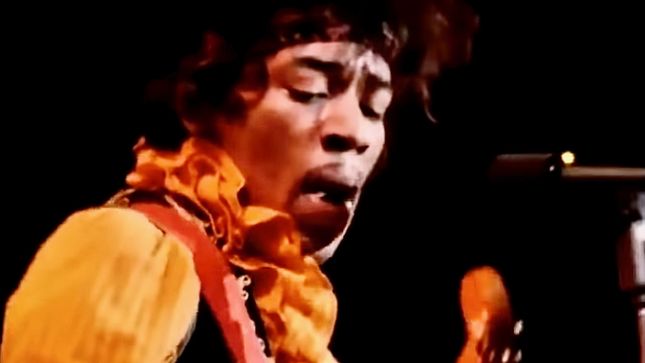 Gotta Have Rock And Roll have launched "The Guitar Gods Collection" auction. Several of the axes up for grabs are listed below:

In 1968, Miami, Florida hosted two Pop Festivals, one in December and another one in May. Both festivals had an impressive line-up of bands, but it was in the second of the two festivals, May 18-19, (both held at Gulfstream Park) that the Jimi Hendrix Experience performed. While the band gave an incredible performance the first day, the second day was rained out. So Hendrix, along with some of the other headliners including Frank Zappa, headed to a nearby bar to jam, giving the lucky patrons there an impromptu concert they would never forget. Offered here is the actual Electric Guild Starfire V left-handed cherry acoustic guitar with serial number EN 1778, that Jimi played that day with Frank Zappa, Arthur Brown and Noel Redding. The photograph shown here was taken that day at the bar and the guitar is clearly shown being played by Jimi. Jimi's father, Al Hendrix, has signed the guitar, with the date, "Al Hendrix 12/92" on the body in black sharpie pen. Very good, stage used condition. Comes with documentation of authenticity including a letter of authenticity from the person who first discovered it, a General Warranty Bill of Sale from the consignor, including all of their notes about the history of the sale, as well as an 8 x 10 color photograph of Jimi playing the guitar at the Wreck Bar. Also comes with a Gotta Have Rock & Roll® Certificate of Authenticity.

Jimmy Page played this 1979 burgundy Fender Stratocaster electric guitar with serial number S913175 live on stage on a few occasions while he stayed in Nevada in late May/early June, 1991. The guitar came from the personal collection of Public Eye guitarist Robbie Gade and the photographs displayed show Jimmy playing the guitar with Robbie. According to Gade, Jimmy came into the venue "Legends" in Incline Village on the Friday of Memorial Day weekend when Gade's band Public Eye was performing. After Gade introduced himself to Page, Page performed with the band to a total mob scene. Page ended up coming back Saturday night to play again and then again a week later when they were playing at the Chateau, very late, when most of the audience had left. That first Also shown here is a copy of a local newspaper article from that period detailing Gade's experience performing with page, with a picture of them. Very good, stage used condition. The guitar comes with several photographs of Jimmy Page playing the guitar, as well as a letter of provenance from Robbie Gade, a letter of provenance from River City Guitars, a copy of newspaper article referring to the event, and a Gotta Have Rock & Roll® Certificate of Authenticity.

Duane Allman owned and played Fender Coronado guitar. Very good condition. Comes with three letters of authenticity, two from the Davis Music Company in Tifton, Georgia confirming the authenticity of the guitar, a third from the individual who purchased the guitar, and the receipt for this guitar from the James Cook Gallery. Also comes with a Gotta Have Rock & Roll® Certificate of Authenticity.

Keith Richards owned and played iconic Gibson Flying V prototype guitar. In the early 1960's Keith had a vintage Gibson Flying V that there are many photographs of him playing. He played the guitar at many iconic occasions including the Ed Sullivan show, it was one of his favorite guitars. The guitar went missing. This guitar is a replica of that very guitar made by Gibson for Keith. Very good condition. Comes with a letter from one of Keith's guitar techs and a Gotta Have Rock & Roll® Certificate of Authenticity.

Richie Sambora owned, signed and stage played custom "Sambora" prototype guitar created by Chris "Lumpy" Hofschneider specially for Richie. Richie is pictured here playing the guitar on state. This is a one of a kind and very rare Richie Sambora prototype guitar from his personal collection in 2006. Guitar has been appraised for $9500 by Cowtown Guitars in Las Vegas by Jesse Amoroso, who has appeared on the hit show Pawn Stars as a expert on guitars, He has appraised this as a Ritchie Sambora prototype guitar made by Chris "Lumpy" Hofschneider, with a Sambora signature. Guitar is signed in bold black sharpie signature is clear. This white prototype guitar was built just for Sambora by Chris "Lumpy" Hofschneider, while he and Sambora were working together to design what eventually became the LTD SA-2 Sambora Signature Series Guitar sold by ESP. This Guitar was used and played in Milton Keynes, UK June 10, 2006. Very good condition. Comes with a letter of authenticity from the owner of Cowtown Guitars, Las Vegas, Nevada and a Gotta Have Rock & Roll® Certificate of Authenticity, 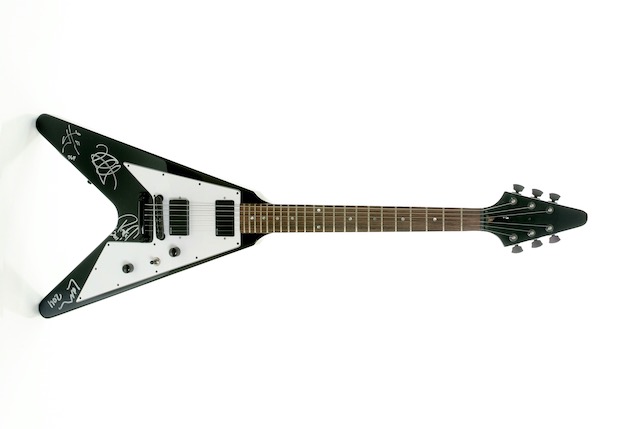 On December 5th, 7th, 9th & 10th in 2011, Metallica played their famous “Metallica XXX 30th Year Anniversary” Shows at the Fillmore Theater in California. During the shows, the Metallica Fan Club, which is run by Metallica, partnered with the Bill Graham Foundation to do charity raffles during the shows. The grand prize was on night four, which was one of Kirk Hammett’s Gibson Flying “V” guitars that the band all signed. The current owner of the guitar was lucky enough to win the raffle and was presented the guitar during the final show. The guitar comes with the original case, which has numbering indicating a stage played instrument. Very good condition besides the rod cover being removed. Comes with a letter of provenance, a photo of Kirk holding the guitar, emails from the Metallica fan Club, and a Gotta Have Rock & Roll® Certificate of Authenticity.