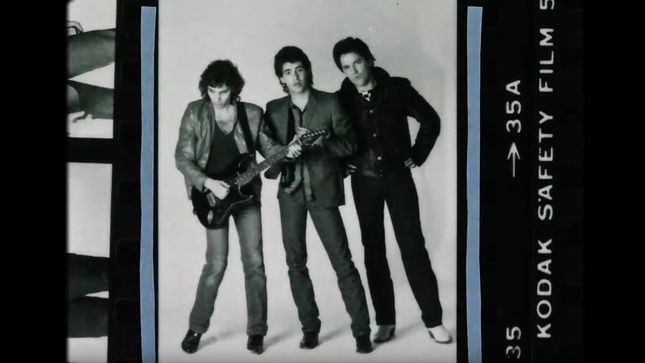 A collection of unreleased demos from Joe Satriani's band from the 80s, Squares, will be released on July 12 on CD digipak, vinyl and digital via earMUSIC. Pre-order the album here, and watch Part 2 of an interview with Satriani, below:

Joe Satriani has had a long and acclaimed solo career, his awards and accolades from fans and the industry alike are unending. Yet, through all of that, Satriani has often mentioned in interviews the musical trio that launched the next step in his musical career, his first band, the Squares, formed in Berkeley, CA in the late 70’s. Until now, no recordings of the inception of the legendary Satriani sound was available. Now that is all about to change!

As Satriani explains, “We were part Van Halen and part Everly Brothers. A mix of heavy metal, rock 'n' roll, punk and new wave. We were hard to pin down and categorize, which is most likely why we never ‘made it’!”

However, Satriani never lost his love for that time or that music.

What remains today are the original, early '80's demos recorded and mixed by the bands then live sound engineer John Cuniberti. They have restored the original recordings, brought them into the digital world, and with loving hands and ears, John has remixed the best of what the band created in studio.

According to Satriani, “They sound better than ever. John was careful to preserve the band's original intent with regards to song arrangements, sound and vibe, and in some cases, extremely creative mix ideas.”

Squares is produced and mixed by John Cuniberti, with Satriani as Executive Producer. The album features lyrics by Neil Sheehan, Satriani on (of course) guitar, Andy Milton on lead vocals & bass, and Jeff Campitelli on drums, all three lending vocals to the mix.

“I’m so very excited that my early ’80’s power-pop trio Squares will finally have their much-deserved international release this July 12th on earMUSIC. This release represents the best of the band’s recordings featuring Jeff Campitelli on drums, Andy Milton on bass and lead vocals, and yours truly playing guitar and doing a bit of singing too. Engineer and long-time collaborator John Cuniberti recorded, re-mixed and mastered all the material for a stunning album debut, albeit 38 years late! Turn it up and enjoy!” - Joe Satriani

"You Can Light The Way":

"Never Let It Get You Down":