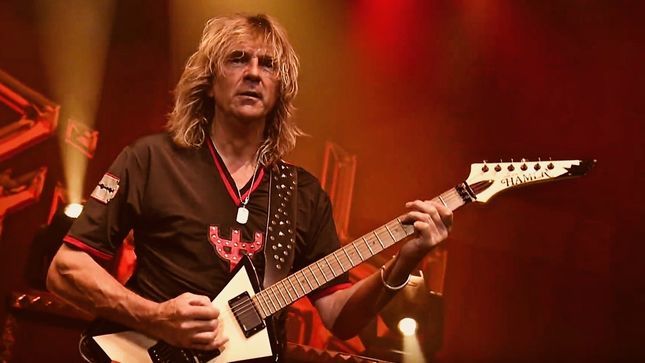 Says Glenn: I'd like to say a massive THANK YOU to everyone who bought The Glenn Tipton Parkinson's Foundation charity t-shirts throughout the various tour legs and a big thank you also to those who had the bike selfies done - I'd also like to thank, Rob, Ian, Richie, Scott and Andy - the donations are building up nicely and that wouldn't have been possible without all the hard work from the guys in the band and the crew who went onstage every night and helped raise money for a great cause

"We will report on the amount raised as we go along - it currently stands at just over US $150,000 - but there's still a long way to go - for anyone who wants to donate to the charity there will be a link set up soon to make that possible - once again thanks to everyone."

Upon the launch of The Glenn Tipton Parkinson's Foundation, Tipton, who was diagnosed with Parkinson's disease four years ago, issued the following message:

"As you probably know by now I’ve had to pull out of the current Priest tour due to ill health - I am still doing some shows and joining the guys on stage for some songs and will carry on for as long as I can without compromising the band. So far when I walk on stage the audience reaction has been amazing, heart warming and quite emotional...

"I knew that something was wrong as my co-ordination and speed were affected and have both been slowly getting worse over the last ten years. Accordingly when I was diagnosed it wasn’t really a shock. Rob, Richie, Ian and Scott are playing better than ever and Andy (Sneap) is doing a really great job - they have all given me so much support - It was the band that suggested we start a foundation which although in my name is really a Judas Priest foundation - we are selling t-shirts with the slogan "NO SURRENDER" (a track off the latest album) which is very appropriate considering the determination you have to summon up to get on with life and beat this illness... it’s the sort of thing that always happens to ’someone else'.

"There are many Parkinson related charities were we could send the funds we raise to which deal with the many different aspects of this disease both physically and mentally - but what really excites me is a brand new pioneering treatment called MR-guided focused ultrasound thalamotomy, which although in its early stages has already had great success with a Parkinson's related condition called essential tremor - Dr. Bain, my specialist who is one of the leading experts in this field and his colleagues are now turning their attention to treating Parkinson's patients with this state of the art MR scanners and are very optimistic as to the positive results that are emerging.

"All proceeds we receive from you will go to this cause and I urge not just Judas Priest fans but everyone out there to help. If you can't get to the shows you can also purchase t- shirts on line at judaspriest.backstreetmerch.com.

"We will keep you posted on what you have all raised through this tour so remember… Keep The Faith and... NO SURRENDER!!!" - Glenn Tipton