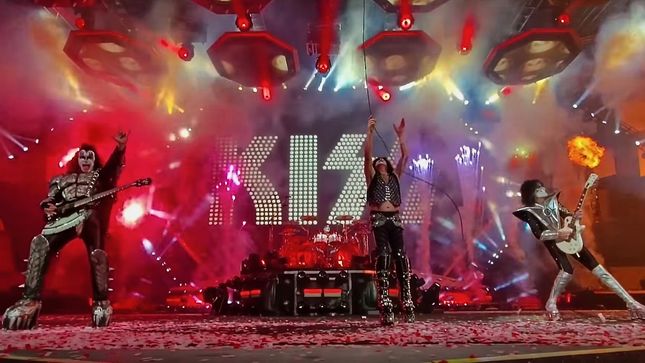 Promoters One World Entertainment and TEG Live broke the news last Thursday that KISS had cancelled their entire Australian farewell tour due to 67-year-old co-frontman Paul Stanley suffering from influenza and a throat infection. In a statement the band said they were "absolutely gutted" and "sincerely apologise" to fans.

KISS were scheduled to headline the Newcastle 500 Supercars on Saturday, November 23, at No.1 Sportsground with The Screaming Jets. A Supercars spokesman confirmed the entire concert had been cancelled and refunds would be provided to ticket holders.

KISS, minus Paul Stanley, took to the stage off the coast of Port Lincoln in South Australia yesterday to perform for great white sharks and a handful of fans. The performance was part of a paid deal with Air BnB.

Australian tour group Adventure Bay Charters posted a couple of photos via their Facebook page, along with the caption: "They came, we saw, we ROCKED! We partied all day with KISS!! Thank you KISS and Air BnB for including us in this once in a lifetime concert that our team and guests will never forget."

Watch a video report below:

KISS recently announced they were forced to cancel the upcoming Australian leg of their End Of The Road Farewell Tour due to frontman Paul Stanley's battle with the flu. The band posted the following update on their official website: