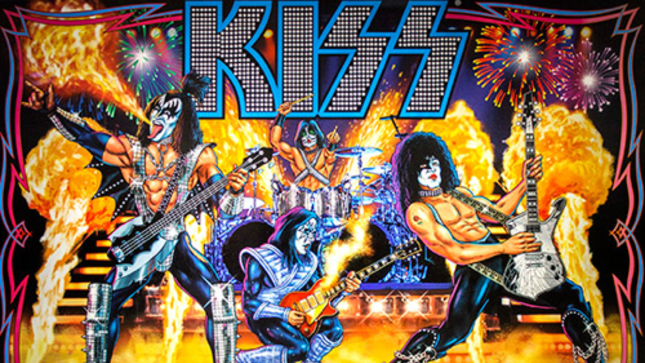 Stern Pinball, the world's oldest and largest producer of arcade-quality pinball machines, and Epic Rights, KISS’ global licensing agent, recently launched the availability of a new line of Pro, Premium and Limited Edition KISS pinball machines, honoring one of the most influential and iconic rock bands of all time.

Pinball News has posted Part 1 of an in-depth review of the pinball machines here.

"Ignoring the wildly flattering muscle tone of Gene Simmons and Paul Stanley, the design is every bit as flamboyant and overblown as the band's live stage performances. It is highly reminiscent of the Bally design, but isn't restricted by the score and credit display windows, allowing the band to spread out across the stage more.

One feature lacking from the Bally version is the individual lighting of the K-I-S-S letters in the backglass/translite. Nor is this advertised as a feature in the LE or Premium models, so that's one opportunity for a third-party add-on.

While the single design across all three models might be an indication of a restricted timescale, it's hard to imagine a second or third design could be as impressive as this one.

It's an oft-repeated story how the original Bally Kiss game has a problem with the band's logo when the game was sold in Germany - one of the largest pinball markets - since the shape of the 'SS' was too similar to the Schutzstaffel (SS) lightning bolt logo.

This, of course, wasn't just a problem for the Kiss pinball. All Kiss logo artwork on records, CDs, posters and even in their live stage performances needed to be changed for the German market.

You might think in these more enlightened times that such sensitivities no longer apply, but there is indeed a different version of the Stern Kiss game with rounded 'S' letters."

CEO of Stern Pinball, Gary Stern, has been promoting the KISS Pinball machines with a new KISS inspired photoshoot with Replay magazine, painting his face black and white in the Gene Simmons demon style.

The company shared some behind-the-scenes photos from the shoot on theirFacebook page, showing Gary Stern in black and white face paint and suit, standing next to their PRO model KISS pinball machine, which features all four faces from band members along the sides against purple and red flames.

This photoshoot comes on the heels of a short documentary Stern released, which was a behind the scenes look at the production of the KISS pinball machines (which you can watch below). Check out the photos here.

Stern Pinball has uploaded an updated gameplay video for KISS pinball machine they are working on.

And posting by Stern Pinball reads: “Here is your exclusive first look at the most current version of KISS Pro Pinball that we have. 0.92. This is also the longest gameplay video we have ever uploaded. The video contains some narration which is pretty interesting to listen to. In this video you will see even more new animations lighting interaction and custom sounds. We continue to work towards the 1.0 release code version. Enjoy!”

Formed in 1973, KISS is recognized for unique face paint, stage outfits and cornerstone personas known as: “Starchild,” “the Demon,” “Catman,” and “Spaceman.” KISS rose to popularity in the mid-1970s with their elaborate live performances and theatrics, including fire breathing, blood spitting, smoking guitars, shooting rockets, levitating drum kits, and pyrotechnics. KISS is highly regarded as one of the most influential bands of all time with worldwide album sales exceeding 100 million records. KISS has an unprecedented 28 gold albums to date, the most of any American rock band.

Stern Pinball’s KISS pinball machines reflect the energy, excitement, and experience of a live KISS concert. Players will experience10 famous KISS hits in the concert arena playfield and embark on an exhilarating experience ultimately becoming elite members of the KISS Army. Players score points and finish game objectives to fuel the audience’s energy and excitement. Higher scores amp the experience–the higher the energy level, the bigger and louder the show–resulting in a KISS concert experience like none other. Players are awarded for completing game goals with a variety of in-game front row seats, backstage VIP access and fun multi-ball modes that thrill players of all skill levels.

“Partnering with rock royalty like KISS is a natural for us,” said Gary Stern, Chairman and CEO of Stern Pinball. “The KISS legacy is admired generation after generation by fans worldwide – KISS’ legendary songs and performances will create an extraordinary pinball experience for players of all skill levels.”

“We are always seeking avenues to expand the KISS brand experience, and the new line of KISS pinballs from Stern are an ideal extension of the brand, providing an immersive KISS experience for consumers of all ages, “said Lisa Streff Executive Vice President, Global Licensing, Epic Rights.

KISS Pinball is available through authorized Stern Pinball distributors and dealers around the world.