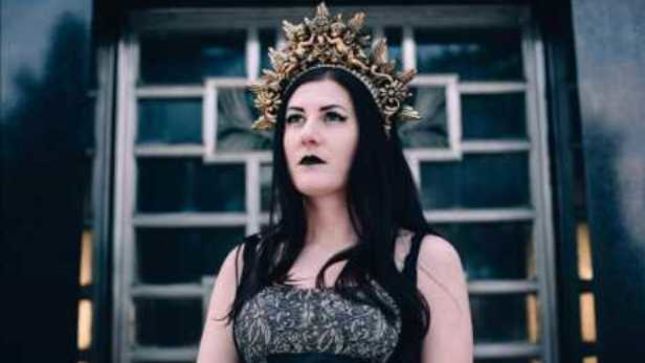 Cradle Of Filth keyboardist / backing vocalist Lindsay Schoolcraft recently completed her first ever solo tour in Australia, She has posted the following message to her fans:

"Many, many thank yous go out to those who were a part of my journey through Australia these past two weeks. I feel like l can’t thank these people enough for being there and helping make it all happen. Thank you to everyone who came out to the shows, to all the bands that I performed with, to the people that housed and fed me, and to those that made it truly memorable. What a unique and different type of tour to embark on. Grateful that it happened and sad to leave. I’ll try to be back as soon as possible though! Until then I’m on my way home to get my solo album released and help the boys write the next Cradle Of Filth album!"

Check out a video interview with Lindsay conducted by Amnplify during the tour below.

"This year has been an extraordinary step on the road to salvation, albeit some 80 shows later," comments Cradle Of Filth frontman Dani Filth.

"We have traversed the globe on the Cryptoriana world tour, firstly in Europe with our good friends Moonspell in support and sharing our travelling bomb-site with us, then In the U.S. with Jinjer and Uncured, before setting our sights on penetrating Asia and Australia.

We’ve also performed in South America, Russia, the Baltic states and Israel too.

There have been some great Summer festivals and then some great Winter ones too, with some amazing times spent abroad in the company of some truly amazing people.

We also changed management companies and now reside snugly with The Oracle Management, which is run by Dez and Anahstasia Fafara, nestling alongside bands like Wednesday 13, The 69 Eyes, Combichrist and Devildriver, wiith the first few months of management seeing them make some necessary and highly significant improvements.

So a very successful period for the band, but it doesn’t stop there as next year promises to be even more productive / spectacular.

A massive new merchandising line; A duo of Cradle beers; A return to big theatrical stage production values live; A potential Cradle make-up line; A full second leg of the Cryptoriana world tour in the U.S. and Canada; Convention appearances; the Cruelty And The Beast remixed and remistressed release; Exclusive themed shows… With South America; Russia and not forgetting a packed Summer run of festivals across Europe also to transpire.

And that’s not to mention the new album we’re currently working on at the present, with Autumn being earmarked for entering the sordid depths of the recording studio.

Therefore we, as a band, wish everyone a fantastically FILTHY new year and hope it brings everything you could possibly desire…

Until we see you next,

UK-based extreme metal icons, Cradle Of Filth, will return to North America once again in support of their latest album, Cryptoriana - The Seductiveness Of Decay. For the second leg of their North American onslaught, the band has enlisted industrial/metal shock rocker Wednesday 13 as well as theatrical metal new comers Raven Black. Watch a video trailer for the tour below.

Comments Cradle Of Filth vocalist Dani Filth: "As a band, we are very much looking forward to the upcoming second leg of our U.S. / Canadian Cryptoriana World tour. The first, at the beginning of last year, was such a success that we decided to come back armed with a bigger, better show coupled with two awesome bands in support. We can’t wait to bring the noise back to our favorite hunting ground! Ia! Ia! Cthulhu Fhtagn!" 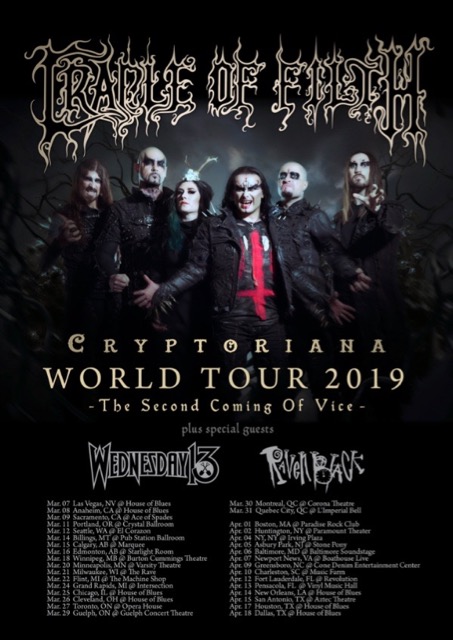