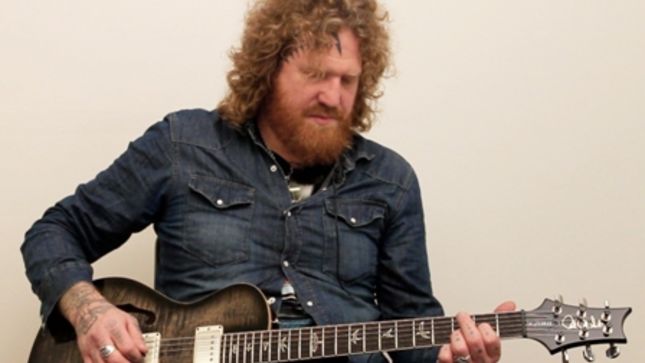 Guitar World recently caught up with Mastodon's Brent Hinds, who discussed his new Epiphone Cuistom Flying V, working with Giraffe Tongue Orchestra, and Mastodon's new album. Following is an excerpt from the interview.

“It’s shaping up to be a double album. One is an album I wrote myself, and recorded with Brann (Dailor/drums) and Troy (Sanders/bass, vocals) during the Once More Round The Sun sessions. My part is called Cold Dark Place, and it has to do with a nasty breakup that I went through. I wrote some pretty dark, beautiful, spooky, funky, ethereal, melancholy music, which also sounds like the Bee Gees a little bit (laughs).

The other guys are writing another album, which I haven’t even heard yet so I can’t tell you what it sounds like. But I’ll come in to give some noodle-y leads here and there. And for sure I’ll be recording with my new signature Flying V…while standing on top of a chair with a werewolf mask on. And that’s not a joke; I really do that. I never sit down to record. You can’t sit down and play a Flying V, everyone knows that.”

The name itself represents strength and ingenuity per guitarist, Brent Hinds, “During the time Mastodon was there for Soundwave, I was at the zoo in Sydney, Australia and was checking out the giraffes. They are amazing animals – one just grabbed a bunch of bananas from my hand with its tongue and peeled them with it as well – by the time the bananas got to its mouth, they were ready to be eaten. I saw Ben who was at Soundwave too and said ‘Man I think I found the name for our band,’ and told him the story.” Ben adds, “That giraffe made it happen… like us, he figured it out.”

When asked about the genesis of Broken Lines DuVall shared, “Writing lyrics for these songs was somewhat like writing for film – the mood shifts rapidly and drastically within a song… sometimes the whole scene changes. There were a lot of times where, if you were trying to impose conventional rock songwriting standards on this, you’d be in a whole world of trouble.”

As unconventional as the creation process was, what brought the core of the band together was simple – mutual admiration and friendship.

"Brent, William, and myself have all been friends for a long time,” says Weinman. “Finishing the GTO record with William completes the puzzle. He is a man of diverse talents, and this band gives him the opportunity to spread his wings."

From adventurous progressive epics like “Crucifixion”, “Broken Lines” and “Fragments & Ashes” to pounding rock anthems like “Adapt Or Die” and “Back To The Light” (featuring the above-mentioned cameo from Juliette Lewis), to future crossover classics like the gorgeous power-ballad “All We Have Is Now” and the electrifying made-for-radio, dance-rock of “Everyone Gets Everything They Really Want” and the album’s propulsive first-single, “Blood Moon”, Giraffe Tongue Orchestra’s debut album promises to be one of the most exciting releases.

Giraffe Tongue Orchestra will make their live debut at Reading and Leeds in the UK and will play a number of dates in the US toward the end of 2016. Each member will be on tour with his ‘other band’ throughout the summer and fall – with Alice In Chains hitting the road alongside Guns N’ Roses and headlining in North America through October, The Dillinger Escape Plan playing dates in August throughout the US, and Mastodon performing abroad this summer.

The band has put together a PledgeMusic campaign to celebrate the launch of the album. Limited edition items and experiences, including autographed signature series guitars and lyric sheets will be available for pledges. Visit this location to explore the possibilities.