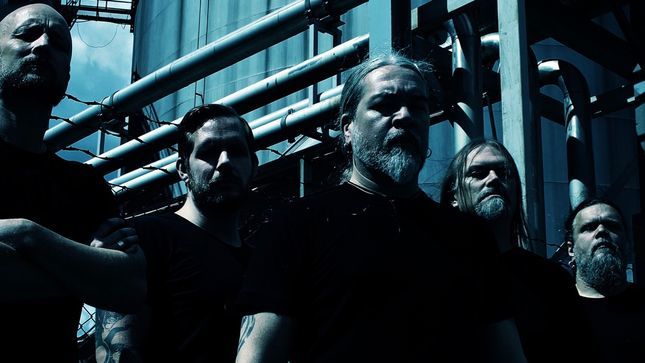 Meshuggah drummer Tomas Haake is featured in a new interview with Knotfest's Mosh Talks With Beez discussing the band's plans for a new studio album, which has been in the works since the summer.

Haake: "I think we have most of the material for the new album. It takes a long time for us between each album, and this time, due to COVID as well, it's gonna be longer than usual, I think. Right now, we're aiming at a release in late '21. Then the question mark right now is, is touring even gonna happen at that point? And if not, do you release the album or do you hold off with it and try to make money some other ways, like doing live shows on the internet or whatever? So, yeah, it's time consuming, for sure.

We tend to scrutinize everything we do a lot, too, so… I think, to some degree, you just turn kind of insane over time when you try to do this thing, because we always try to challenge ourselves and we always try to find something that we haven't done before. But we've done this for 30 years now, so it's harder and harder to find what's special with this: 'This riff, is it cool enough? Or what's going on?' So you tend to kind of overly scrutinize things, and sometimes you just kind of paint yourself into a corner with that kind of thinking. And sometimes you even realize, 'I can't even listen to this. Why would we release anything like this? It doesn't even make sense.' So you have to find kind of a balance. What's a good balance of a song or an album as far as technical aspects, and what do people wanna hear? What do we wanna hear? And hopefully we can get to some kind of good level of mix in that.

As far as the music goes, we try to do kind of the opposite of what AC/DC has been doing for 40 years. So we're not trying to write the same album over and over, and whether we succeed with that or not, that's more up to our fans and other people, but that's definitely the aim. We try our best to kind of find new grips within the framework of what we're supposed to be, I guess, because we don't wanna really step out of that either. We're not looking to be another band all of a sudden or something that we haven't been or that is not true to kind of what we're doing."

Meshuggah issued the following update back in July:

"As previously communicated, our intent was to keep our commitment to all festivals and shows planned for summer 2020, that couldn't take place due to the COVID-19 pandemic, by re-confirming them for the same dates in summer 2021. Full Force Festival is one of these festivals that has already been re-confirmed and re-announced.

However, after seeing some of the other festivals move to completely different weekends in 2021, we eventually found it impossible to go ahead with the tour next summer due to logistical reasons. Which also means that Meshuggah have to cancel their planned appearance at Full Force 2021.

Another influential part of the decision to not tour in summer 2021 is that COVID-19 restrictions have also affected Meshuggah's progress with a new studio album, to a point where we now see the need to keep summer 2021 clear to put finishing touches to the album. Meshuggah and their management would like to apologize to all fans and promoters being affected by this.

Some good news is to be found in here though: there is a new Meshuggah album coming..."