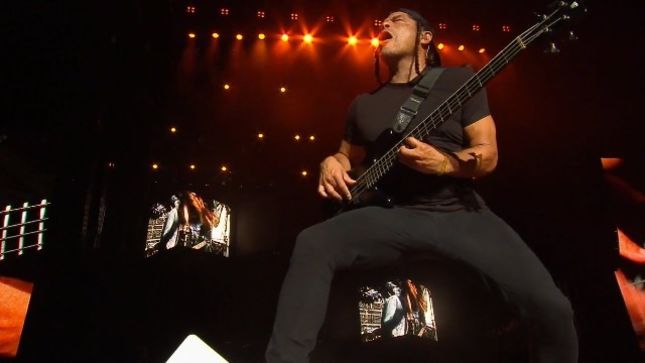 Metallica bassist Robert Trujillo recently guested on The Vinyl Guide (Episode 20) and dove into his lengthy resume including standout moments, such as hearing unreleased, extended Ozzy Osborne tracks featuring Randy Rhoads, his involvement in the legacy of Jaco Pastorius, playing the "Bass Of Doom" and gives a Covid-19 update on Metallica.

Trujillo: "For me, he was one of the biggest influences. I'd have to say - Jaco, Geezer Butler from Black Sabbath, and Anthony Jackson who played bass on 'For the Love of Money' (The O'jays). And I ended up meeting Jaco around the time that we were filming for the interviews (for the 'Jaco' documentary), and he ended up being really cool, and we stayed in contact, and I always sort of channeled their energy into what I would write for Infectious Grooves. There's a lot of specific moments where I'm actually pulling directly from the people that I grew up listening to, and Jaco is definitely a huge inspiration for Infectious, absolutely. A song like 'Violent & Funky', it's not a fretless bass, but that is absolutely kind of inspiration from him. And the same thing with the song 'Therapy' which featured Ozzy, so it's all there."