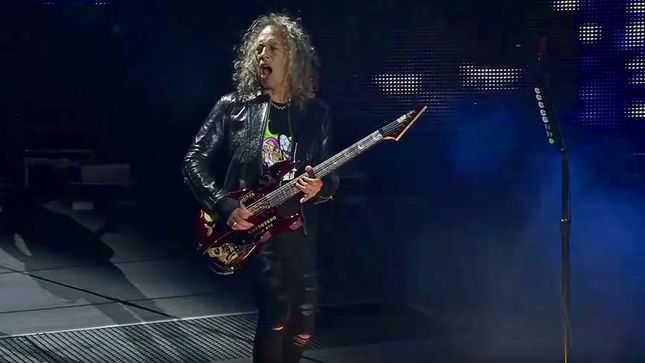 Metallica have released professionally-filmed footage of their performance of "No Leaf Clover", filmed at Valdebebas in Madrid, Spain on May 3. Check it out below:

Metallica's next concert is scheduled for October 17 at Optus Stadium in Perth, Australia. Find the band's complete tour itinerary here.

Pollstar is making the case that Metallica is the biggest touring band of all-time.

They report, “The numbers speak for themselves: according to Pollstar Boxoffice, Metallica sold nearly 22.1 million total tickets and grossed some $1.4 billion since 1982, dwarfing huge rock bands of the era including AC/DC (14.3 million tickets) and Ozzy Osbourne (10 million, 13.2 if counting Ozzy plus Black Sabbath). The closest competitor on dollars grossed is Guns N’ Roses, with nearly $800 million grossed largely thanks to the band’s mammoth Not In This Lifetime reunion tour.

“Those 22.1 million tickets puts them in select company, including just behind the one and only U2 – which until recently held the all-time touring record on its 360 run – solidifying Metallica’s rightful place as one of the biggest bands in the world, and still growing. Over the past five years alone, the band’s headline touring business puts them in a class with not only U2, but The Rolling Stones as well as newcomers like Taylor Swift and Ed Sheeran. However, when accounting for the reach of Metallica’s business – which includes breaking a slew of attendance records on their current tour clear to Moscow – while playing 48 countries and every single continent (including Antarctica) over the course of their career, fervent and rabid merch consumption totaling $125 million in North America since the Black Album and into the high teens per-head on its latest touring, and the band’s road touring with no-gimmick reunion or farewell announcement necessary to drum up extra business – and Metallica may just be the biggest band in the world.”

“I keep thinking and forcing myself to think all our best years are still ahead of us. We may even turn professional and do this full time one day,” jokes original Metallica drummer and oft-spokesman Lars Ulrich. “That’s the MO.  It’s always, ‘What’s your favorite record?’ It’s the next one, the one we haven’t recorded yet. it’s always about the possibilities, always about what can be, what’s coming. That, to me, is what this is all about and I think that attitude is a big part of the why Metallica still connects to so many people around the world.”