METALLICA Singer JAMES HETFIELD Guests On The Strombo Show - “We Have Done Lots Of Things That Have Not Been Considered OK By The Metal Rulebook”; Audio 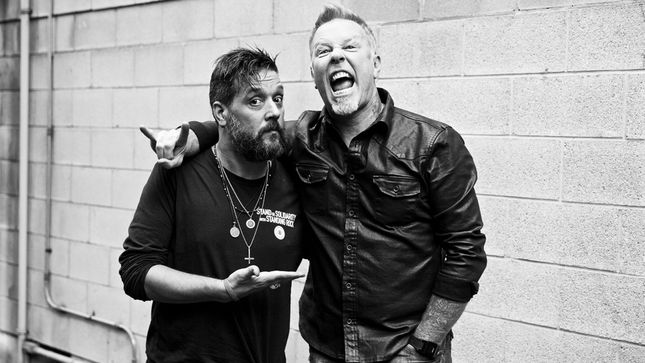 On Sunday night's episode, James discussed asking questions to his mother's grave, explores the creative process behind Hardwired..., shares stories of his fatherhood, thinking about his own mortality, realizing that his songs were bigger than him, facing death, the Fade To Black moment, his relationship with Lars Ulrich, Kirk Hammett, Cliff Burton, when Waylon Jennings asked him for help, sobriety advice that he received from rock gods, the Big Four, Napster and the music that he is listening to now - including Gojira. A few excerpts follow…

On how Metallica have changed, stayed the same: “I’m still 18 in my head. I'm a boy trapped in a man's body right now. We are different. We are certainly different. We have grown up in this business and grown up on the road. We're writing about what it is now."

On if his kids listen to Metallica: “Hell no. They do know the songs just cause they've been dragged around on tour and they know the melodies, they know the songs and they know when the crowd does this and when the explosions happen and all that stuff. They grew up on the road, pretty much. They respect my music, they love that I love it and I also have that respect for them and their music."

On what keeps him going and where it comes from: “There is nothing better than standing in front of my rig and playing a big, fat, heavy riff. There is nothing better. I don't know what it is and still on a quest to write the best riff, the best album, play the best gig - that's still there, somewhere... I guess [it comes from] perfectionism, never being satisfied and always wanting a little more. Should I lay down on the coach here? [Laughs] Maybe, I guess there is still wanting to feel okay and still wanting some assurance that it is going to be okay and connecting to people through music is where I get that okay-ness. "Hey, that song you wrote - it helped me!" That always feels good and that always will and continuing with that feeling, continuing to connect with people. I think that perfectionism, Lars and I share that and wanting to turn over every stone, wanting to try everything, wanting to explore and do new things with this band. We have got the key to the universe, we can do what we want and we are still finding stuff to do... It's a work in progress until the end, if there is an end. Always trying to get better. Always wanting to learn something."

On thinking about his own mortality as response to 2016: “It puts into perspective that we are here on borrowed time. We are doing what we can be doing, doing our best while we are here. It makes me want to use my time wisely and making music, going touring as a wise use of time."

On being the outsiders of the outsiders: “I guess we are metal, but we are outsiders within the outsiders. We have done lots of things that have not been considered OK by the metal rulebook. If you are honest with yourself, it is so much easier to live. Why would you keep any secrets, I guess. I don't know. As an artist, we are able to explain ourselves. We are able to be honest and look at the world in the eye and say, we're like this - maybe we are not supposed to be like this, but I am. Does that make me weird? Does that make me fucked up? I have to talk about it or else it gets weirder. The honesty in the music has helped us and in turn, helped other people.

On his relationship with Lars: “We have started fires. We have walked through fires. We have put fires out. We have done a lot of growing up together and gosh, there is no other way to explain it. He is a brother. Love him, hate him. He his a brother... It evolves, it morphs and it goes from, at the end of the day - what I can say - when him and I sit-down and are real with eachother, great shit happens. Really great shit. Just talking about, oh my friggin' kids drive me nuts and he is like, "Really! Oh yeah. This and that." And we connect and all of a sudden, we are real again... If I live in my head, I get off track. I start thinking too much - he's trying to manipulate me, he's thinking the same about me. When we don't communicate, you know we are creative people, we start making shit up. We have to to talk or else things go sideways."

On Kirk Hammett: “Throughout the years, he has worn this stripped uniform like a referee and he goes "Whoa! Hold it guys! Let's get along. Everyone get along!" Kind of like the peacemaker, the go-between and that makes him feel safe. If we are arguing, that doesn't make him feel safe. It makes total sense. Lars and I are in the front seat fighting over the steering wheel and Rob and Kirk are in the backseat, loving the ride like where are we going next guys, what's happening. Maybe they even have their heads sticking out the window, tongues out - where are we going!? They're there and they're wanting to know what is next, what we're going to do. It is a great combination. We know eachother so well, so when we respect eachother's role in the band, we're not trying to step on eachother's toes. That's a pretty key thing when you are in a relationship with four people or three other people that you have to respect eachother and you know eachother and it is okay, you don't have to change them."

On Cliff Burton: “It's been a while since I've watched Cliff 'Em All, but that was all bootlegged footage. Not everyone had their phone at the gig. That's how we got our first release like that. It's the only way that we could revisit Cliff is through bootlegged footage like that. We are grateful for all the footage that people were sneaking in, filming and I think it is beautiful that we are at a point where there is going to be a lot of anniversaries now. We have put out a lot of stuff and we have survived. We have this Master Of Puppets book, going back and going through all the Cliff stuff has really brought him back into our hearts again. He has always been there, but he has woken it up in us again. It is always a treasure when you find a picture that you have never seen before - that's me and Cliff and I know exactly where that is, that is at Belgium in a bar! Most of the stuff is out there, but man, we have been scouring and looking for stuff and there is some really, really cool stuff that we have found... I think he means those first three records and they were very, very powerful and obviously, a great start for us. He is still alive and well at every concert. There is not one concert that doesn't go by where someone doesn't have a Cliff banner or something or someone mentions it. He is there."

Listen to the show now, streaming at this location.