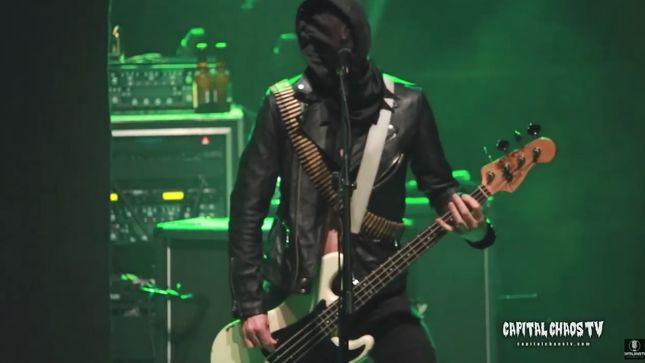 The Mighty Zee a.k.a. Zoran Theodorovic of Capital Chaos TV chated with Athenar of Midnight at The UC Theater in Berkeley, California on October 5.

On releasing product every year since 2003:

"Pretty much. Pretty much. And you know there's a lot of, you know, whether it be just some song here or an album there single there or whatever the hell. Well for me first of course cause I'm a greedy bastard but then if the fans like it, then they like it, but yeah, yeah that's consumerism, that's another good American trait.”

On being part of the Metal Blade family:

“It's, it's cool man. I mean you know if I break out a character here and you know I could just be the typical asshole and say you know whatever, but in all honesty, you know, growing up with that label and seeing you know bands like Slayer and Bitch and you know bands that I really like Nasty Savage and then here I'm putting out a record on the same label, it’s pretty surreal pretty please.”

On doing a cover of Quiet Riot’s "Slick Black Cadillac":

It was originally a split with a Japanese band called Abigail, and it was to somewhat finance the tour that we were doing there. So it was, it was what they call a cash-in record and so I, the idea was just to do kind of like a Japanese type song but instead of doing a Japanese band my stupid thinking thought it'd be funny to do an American band that just released it on a Japanese label. You know the first two Quiet Riot's were Japanese only, so I just thought it was okay, you know ‘Slick Black Cadillac’ yeah. yeah, what the hell? So yeah I think the people who knew, knew, the people who didn't know thought it was fucking stupid.”

Metal Blade Records has welcomed Midnight to its worldwide roster. By now, Midnight need no introduction. Guided by the twisted muse of mainman Athenar since 2003, this Cleveland cult have been slaying the metal/punk underground with their own, highly addictive brand of lust, filth, and sleaze, subsequently building up a sizable catalog and garnering a rabid fanbase. While there are certainly fanatics for the band's early EP work, it was Midnight's debut album, Satanic Royalty (2011), that entered the band's name into the annals of "classic." Never one to rush things (nor drop an EP along the way), Midnight continued their underground dominance with No Mercy for Mayhem in 2014, further perfecting their signature sound. With the band's massively anticipated third album, Sweet Death and Ecstasy, the band showed their darkest and most daring effort to date. Fans can expect another crushing full-length, Rebirth By Blasphemy, in early 2020 via Metal Blade Records.

Midnight's Athenar comments about the signing: "Well, I sent a demo tape of my band to Metal Blade Records back in 1987. It only took them 32 years to respond and guess what? They want to release a record! Patience is a virtue. Now YOU WAIT until this new album comes out so you can bang your fucking skull against a brick wall while cranking the stereo at neighbor destroying volume!"

Before their new album drops next year, Midnight have now released the title track from their upcoming full-length, "Rebirth By Blasphemy", as a 7"/digital single to coincide with their signing, plus North American tour with Obituary, Abbath, and Devil Master, which kicks off today.