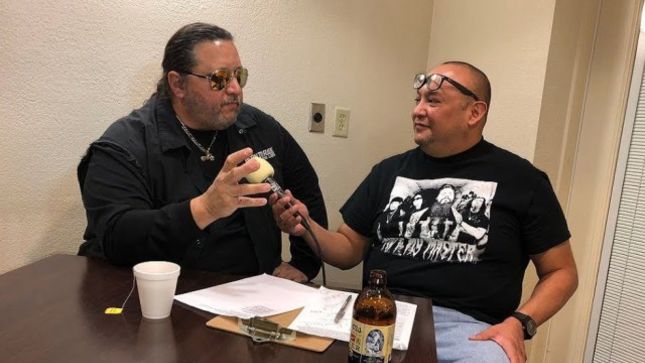 Cult TV-show Robbs MetalWorks interviewed Nasty Ronnie Galletti, legendary vocalist of Brandon, Florida's power thrash outfit, Nasty Savage, on November 10th in San Antonio during one of the band's sporadic shows since its re-emergence in 2002. The chat covers what the essence of Nasty Savage truly is, what being an ambiant performer and frontman means, what the band's 'business plan' was in the beginning, how Tracey Barnes (of 99.5 KISS) helped them secure their deal with Metal Blade Records, the possiblity of reissuing their classic releases, the importance of marketing to any band, the band's current line-up (and long standing, original guitarist, David Austin), the possiblity of a new EP in 2019, and about Ronnie's biker based TV show called Born To Ride.

Guitarist David Austin issued the following statement: "My longtime friend Richard Bateman has passed away from a heart attack, absolutely devastated, extraordinary bass playing that he did with Nasty Savage especially Penetration Point, I can't even put it into words, absolutely devastated. I hope the metal community will surround his family with open arms and give them the comfort that they need at this moment and time, I'm completely shocked. Love you Richard may he rest in peace, genuine loving person and extraordinary bass player to say the least."