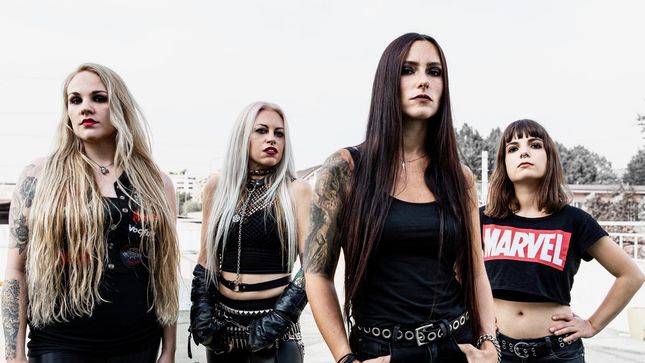 A heavy, incontrollable vortex led by the full-speed thrash/death metal engine Nervosa is ready to attack the world and leave nothing but Perpetual Chaos (out January 22 via Napalm Records) in its wake. Their talented new line up - featuring founding guitarist Prika Amaral and talented new members Diva Satanica on vocals, Mia Wallace on bass and Eleni Nota on drums - strike with inexorable full femme power, showcasing their ability for critical and straightforward lyricism mixed with an intoxicating blend of thrash spiced with remarkable death metal assaults.

Their high-speed new single, “Guided By Evil”, is the first offering from next year’s full-length and highlights their sinister new facets, whilst also underlining their unmistakable thrashing roots. The fitting audio-visual grabs the demons by the horns and evokes a bloody, enigmatic spell. The first single pulls no punches by dissecting the concept of two-faced people who eventually stab you in the back - truly guided by evil. Enter the coven and be a part of the next generation of Nervosa!

Guitarist Prika Amaral comments: “It was a wonderful experience with these girls, they are all very talented and did an excellent job, I have never been so happy with the final result of a record. I chose Artesonao studio in Malaga, because it is isolated and in an extremely beautiful place, we worked hard but we had the best vibe between us.”

Watch the video for “Guided By Evil” below.