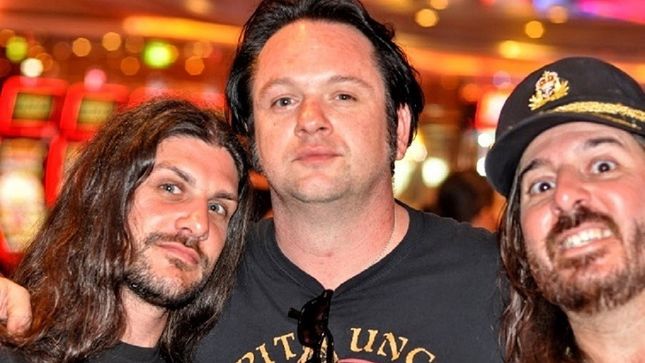 From a one-off, Friday night concert in Tulsa, OK, Jarvis Leatherby called into Bill Peters' WJCU radio show (Cleveland Hts, OH). Peters is college radio's longest continuously running DJ, on the air since '82. The bassist/singer (also a member of Cirth Ungol, as well as managing Midnite) let the cat out of the bag, in regards to Night Demon's latest plans. About a month ago, the Ventura, Cali based band posted a short teaser online, announcing they were recording in Chicago, with famed 9’0s alt-rock producer Steve Albini (Nirvana, Pixies, Bush), who was also at the helm for records by Page/Plant & Cheap Trick. "We've been taking some time off, from the hardcore touring this year, to work on a new album. It's no surprise that for the last five years, this band has been homeless. Now we've got a 2500 square foot space (in Ventura), where we're building our own studio and I have an office there. So we've been playing carpenters. I'm not afraid to be honest. When we signed, we got involved with a successful underground metal label. Since then, they've been bought up by a bigger company. That's one of the reasons there's been a little lag in getting new music. We've got a very unique idea of how to present the next record, but they didn't really see it. We want to be part of the new industry. We're still committed to physical product. It's important to us and our fans, but not everyone in the industry, especially big record companies. There was point where we threatened to break up the band. Recently, the president of the label flew out and discussed everything with us, so we're moving forward."

"I'm an open book with our fans. There's a lot of really cool music that's going to come out, probably next year. We're going to Denmark to work with Flemming Rasmussen (who did the good Metallica records). We don't want any of these guys to change our music, just get it recorded well. We've (already) got songs that are done. They could come out now. Some of them, there are 13 demo versions!  I think some of it's the heaviest thing we've done, but we also want to write something interesting. We don't want to write another ‘Heavy Metal Heat’. The 25 songs we've released are the only ones we've written. This time we have so many, there may be extras."

In the meantime there will be periodic exclusive shows, including a pair of distinct German dates. "When we started this band, if you'd told me that anybody would have flown us out, even just to do yard work, I wouldn't have believed it," joked Leatherby, before continuing, "We've got something special planned, a short tour of the US, for next year." The only "real" 2019 touring will be when the band shares a tour bus with Sacred Reich, for their entire late Fall European trek.