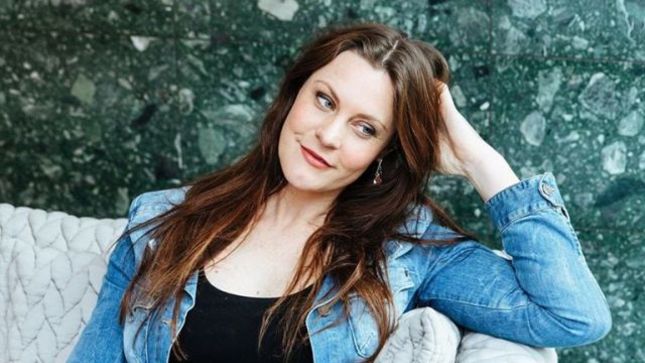 Nightwish singer Floor Jansen has released an English-language version of her recently recorded solo song, "The Fight Goes On". The original Dutch-language version of the track, "De Beelden Blijven", was written by Han Kooreneef and recorded for the documentary Kinderen In Oorlog: 75 Jaar Later in cooperation with War Child.

War Child is an organization that provides education and psychological care for children in conflict zones across the world.

Says Jansen: "War Child is providing aid in Beirut as we speak and that makes this song extra important. Because the fight goes on. In so many places on this beautiful green earth help and support is vital for the future of children hurt by war and other forms of terror.

"War Child helps children worldwide who suffer from the traumas of war. They want to help them with their invisible scars, to break the silence about their experiences on a child-friendly way through music, play and interaction with other children. So called psycho-social help."

Jansen recently checked in with an update on her ongoing Storytime series on YouTube:

"Today's episode is about my journey across Northern Europe, which started six years ago, and on top of that I talk with Elize Ryd from Amaranthe about their new upcoming album and single."

Jansen recently launched a new online series called Floor Finds, featuring conversation with a guest that does not necessarily center on music. Check out the new episode below.

Floor: "For the second installment of Floor Finds I talked with Elize Ryd about what makes singing live so special. What is your most memorable memory of attending a live show?"