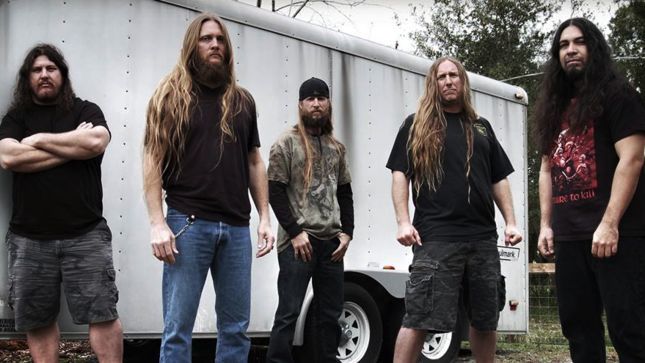 Death metal legends, Obituary, released their ninth full-length album and Relapse debut, Inked In Blood, last week. The record was met with critical acclaim and this week has cracked the Billboard Top 100 coming in at #75.  This is Obituary's highest chart number to date and sold almost five times as many copies of their 2009 release, Darkest Day. Inked in Blood also came in at #8 on the Top Hard Music Chart and #15 on the Top Current Rock Chart.

The band commented on the Inked in Blood's killer first week: "We could not be more excited about the first week of sales and Inked In Blood's chart position. We knew this was a monster record that the fans were dying to get their hands on, and everybody seems to really be digging it. Now it's time to put the hammer down and focus on the second week of sales. We knew Obituary fans were some of the most devoted fans on the planet and we are looking forward to watching as they help us blow this thing out of the water."

Carcass, Obituary, Exhumed, and Noisem are in the midst of an 11-date tour of the United States dubbed, Inked In Steel. Remaining dates are listed below.