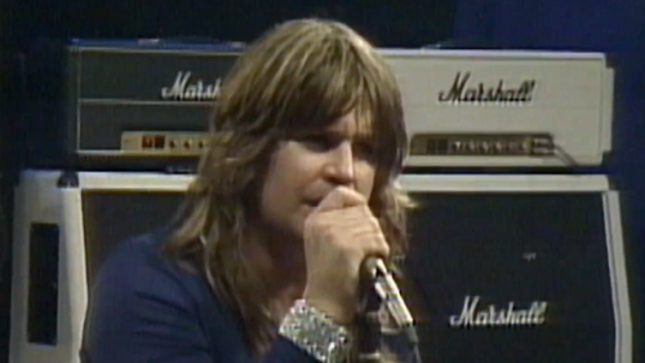 A newly uprezzed HD version of 2010's documentary 30 Years After the Blizzard - originally only released as part of the Blizzard Of Ozz / Diary Of A Madman boxset - debuted earlier today, September 18th, and will run for seven days on YouTube.

First up, a new animated video by Tiny Concert for "Crazy Train" debuted on YouTube. The clip features Ozzy and his band in an animated live performance. Watch the clip below:

Ozzy will discuss Blizzard Of Ozz in a special one-hour 40 Years Of Ozzy Osbourne's Blizzard Of Ozz special on his Sirius XM, Ozzy's Boneyard Channel. The set debuted tonight (Friday, September 18) at 5 PM, ET/2 PM, PT and will airi multiple times throughout next week, the special - which features a conversation between Ozzy and his close friend/musician, Billy Morrison - will take listeners track-by-track through Ozzy's first solo album on its 40th anniversary.

On Sunday, September 20 at 7 PM, ET/4 PM, PT, Ozzy will host a special Blizzard Of Ozz listening party on his Twitter (talking about all the tracks from the album) on its official release date anniversary.

A selection of commemorative Blizzard Of Ozz merchandise (t-shirts, jersey and a track jacket) is available via Ozzy's website.

Initially released on September 20, 1980 in the UK, Blizzard Of Ozz marked Ozzy's debut studio album (following his departure from Black Sabbath); the expanded digital 40th anniversary edition is available via Sony/Legacy. The new package includes Ozzy hits: "Crazy Train," which will hit certified 5x platinum status to coincide with its September release date; the gold-certified (in four countries) "Mr. Crowley" (both of which feature Randy Rhoads on guitar); along with "Suicide Solution," plus live versions of seven tracks that were unavailable digitally.

The album's "Crazy Train" went on to become one of Osbourne's signature tracks; the song has also become one of the most played sports anthems frequently heard at NFL, NBA, MLB & NHL games. It peaked at #9 on Billboard's Top Tracks chart upon release - and in 2009, the song achieved a 5× platinum certification. The live tracks - "I Don't Know," "Crazy Train," "Mr. Crowley," "Revelation (Mother Earth)," "Steal Away (The Night)" and "Suicide Solution" - were recorded on the Blizzard Of Ozz tour and were previously found only in the Blizzard Of Ozz/Diary Of A Madman 30th Anniversary Deluxe Box Set. "You Said It All" (live) was originally found on the 1980 Mr Crowley live EP, recorded in 1980 at the Gaumont Theater, Southampton, UK and was also not previously available digitally.