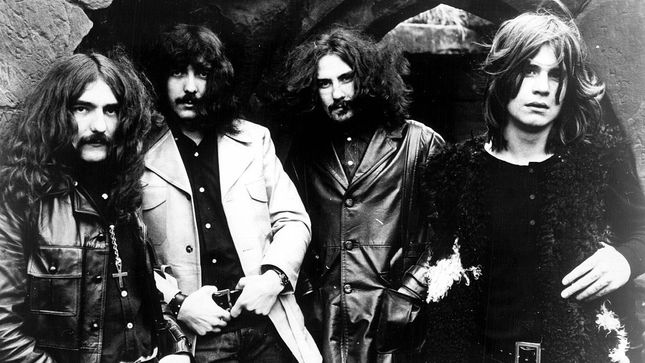 Birmingham Live is reporting that Black Sabbath's first two albums are to be played live in the city where heavy metal was born to celebrate the 50th anniversary of the group's first recordings.

The news will bring some relief to the band's fans who were told this week that Ozzy Osbourne was postponing his February 14, 2020 gig at Resorts World Arena - which has already been delayed by a year after the singer fell ill at the beginning of 2019 weeks before his No More Tours 2 dates were due to begin in Europe.

The void will be filled by Manchester rockers Sabbra Cadabra who recently played on The Old Junction Turn, an island in the middle of the canal between the Sea Life Centre and Arena Birmingham. They had a meet and greet with original Black Sabbath members Tony Iommi and Geezer Butler who then sailed on towards Broad Street where they unveiled the Black Sabbath Heavy Metal Bench created in honour of the band's 50th anniversary.

Missing from the day on June 26 were original drummer Bill Ward and lead singer Ozzy Osbourne who has also been battling ill health - though the wild man of rock has now rearranged his solo date at Resorts World Arena for February 14, 2020.

In the meantime, Sabbra Cadabra will now recreate the original sound of the band at The Bulls Head pub next week. The gig will be free and original Black Sabbath manager Jim Simpson - the first man to put Ozzy Osbourne on to a stage - will take part in a Q&A with fans.

Sabbra Cadabra will play at The Bulls Head (ex-City Tavern) on Bishopsgate Street on Tuesday, October 15 when admission will be free on a first come, first served basis.

Ozzy Osbourne has postponed his 2020 European shows; he explains more in the video below.

Judas Priest will remain as support on the rescheduled European tour as part of their JP/50 Heavy Metal Years anniversary tour. Meanwhile, Ozzy’s North American dates will go on as scheduled, kicking off May 27, 2020 in Atlanta and concluding July 31 in Las Vegas.