PAUL GILBERT Talks Toning Down The Shred, MR. BIG's "To Be With You" Guitar Solo In New Interview 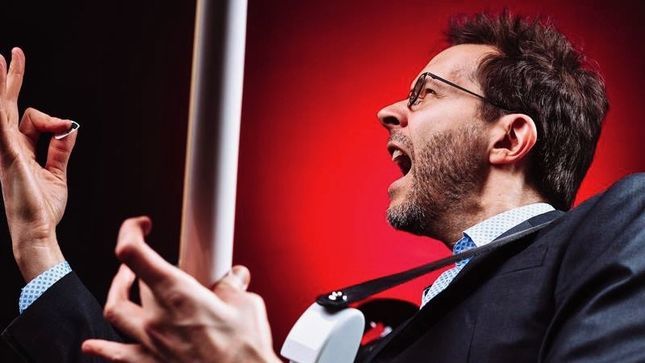 Guitarist Paul Gilbert (Mr. Big, Racer X) is featured in a new interview with Louder Sound discussing his new album, Behold Electric Guitar, lyrical playing, and his sense of humour in his writing, an dthe future of Mr. Big. Following is an excerpt.

Q: You’ve toned down the shred in favour of very lyrical playing. Was that a conscious decision?

Gilbert: "When I was a kid you’d still hear muzak, elevator music, so for decades I thought if an instrument plays a vocal line it’s going to wreck it. But then I did the G3 tour with Joe Satriani (in 2007). He’s fantastic at playing melodies on guitar, and I realised it can sound good if done with care. One of the most satisfying things a musician can do is make that connection between your hands and what you’re hearing with your inner melodic generator. This album’s been my most successful in those terms."

Gilbert: "You never know. We did a lot of touring these last couple of years and I got burned out on playing the same great set every night. I’ve got my own tour this year, and I’m always trying to do something new. It’s terrifying but interesting."

Q: There’s a pleasing paradox in that your biggest hit, Mr. Big’s "To Be With You", features your simplest solo.

Gilbert: "I like that solo! Everybody who hears what I do is an individual. People hearing that in the pub, that’s probably the only time they’re going to hear me play anything. Those who come a masterclass will know my deep cuts and will be angry if I don’t play 'Scarified' by Racer X. I’m just fortunate and happy that anybody’s paying attention."

On June 1st, Gilbert brought his Behold Electric Guitar show to the Rockpile in Toronto, Ontario. Jeff Answorth has posted 45 minutes worth of footage from the show, saying "What an utterly amazing show! They played for 1 1/2 hours. The joy they got from playing projected into the crowd. What energy! A special shout out to the guys (and gal) standing behind Paul. That band is TIGHT!!"