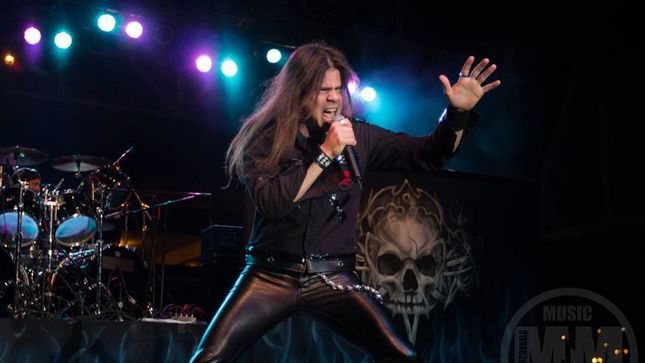 Queensrÿche vocalist Todd La Torre has launched a new official website. He recently spoke with BraveWords about putting the new site together:

"A while back I made a Facebook post asking for anyone interested in helping me create a logo for myself, something to represent Todd La Torre. Among the many emails and renderings sent to me, one stood above the rest. Eric Loehrmann created the new TLT logo, and after much back and forth refining things on the phone I had mentioned that I was wanting a new website. I had no idea at the time that he was just the man for the job."

The new site features a blog, videos, news, a live tour date feed, along with Twitter and Facebook feeds. It also includes a music player with the latest Queensrÿche song samples. Check it out at ToddLaTorre.com.

Eric Loehrmann's portfolio of work can be viewed via his official site at Rentonrc.com.

"Discordia" marks Drover's first full-on metal tune in years, much to the appreciation of his distortion-fed fans. He and La Torre spoke exclusively with BraveWords about the collaboration. Asked to describe the music versus his back catalogue, Drover considers the track a mix of old and new territory."Does it sound like Eidolon? With the lower guitar tuning I think it sounds heavier, but I think it's got a sound that I'm known for. The song wasn't intentional. It's got a bit of a Nevermore vibe to it, and Todd's got these really power ful vocals. I think it gave him the chance to show off some of the stuff he hasn't had the opportunity to do so far, like add more aggression to his voice and use accents like the more growling kind of stuff. But he's still got his signature sound; for the people that know his voice, it's there. I think the song is a great marriage between my playing and his voice. I'm very happy with it."

As are the fans, with La Torre's following being particularly vocal in their appreciation of his aggressive performance on "Discordia"
"When I'm doing Queensrÿche stuff I can't use my voice like that because the music doesn't call for it," says La Torre. "When I heard Glen's stuff I knew what I could do with my voice for it because it's a different animal. There are parts on this song where nobody's ever heard that more aggressive side to my voice. As soon as I heard the track I thought it was great. Glen told me to just see what I could do with it, no pressure, no rush, and it turned out to be pretty quick and easy. I tried to be melodic but heavier in some parts. I wrote all the lyrics and the vocal melodies and harmonies, and sent it back to Glen when I was half done for his feedback because I wanted to make sure we were on the same page. He thought it was cool and told me to keep going."
"Glen initially told me he was doing a compilation with various artists and asked me if I'd be interested in doing a song," he adds. "I said yes because it sounded like fun. This song was intended for that compilation, but I think he liked it so much that he didn't want it to sit until the whole project was done."

Of course, some fans are hoping La Torre puts in a similar performance on the next Queensrÿche album, while the requisite number of online trolls have accused him of playing copycat versus having his own vocal style.

"I'm not a one trick pony; I write what the music calls for," La Torre states bluntly. "So, if people start saying 'I hope he sings like this on that next Queensryche album...' I have to say it's not going to happen. The Queensrÿche material doesn't call for those vocal stylings. If there's a sliver that does, fine, but don't count on it. 'Discordia' allowed me to show off the singing styles that I have, which most people have probably never heard from me before."

Fans should note that this is not a project and not the start of a new band. Drover has a number of projects on the go, while La Torre is 100% focused on Queensrÿche.