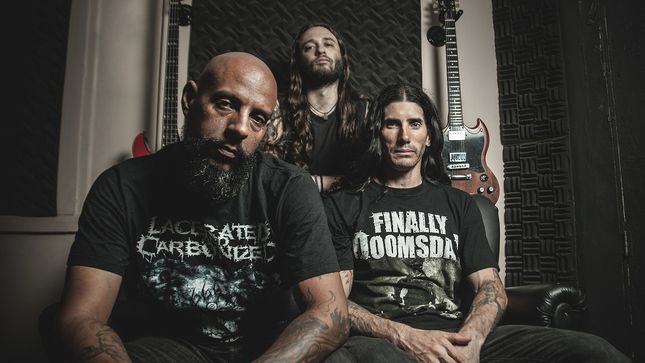 Brazilian death metallers and recent Agonia Records signees, Rebaelliun, today preview their upcoming, as-yet-unannounced album with a new song, titled "Vile". The song is available in the form of a lyric video, which can be seen below.

The band had this to say about the track: "'Vile' talks about a very recurrent subject - the human selfishness and the false ideas people have about money and being better than others. The lyrics say a lot about what we see here in Brazil; more and more people with no sense of reality, who justify their twisted morality, but in truth are nothing more than hypocrites."

The new album is tentatively slated for release in fall 2020.

Rebaelliun was founded in 1998 and is considered among the most important death metal bands to emerge from Brazil. Despite being formed more than twenty years ago, the band faced a considerable hiatus, which translates into less than a decade of actual activity and not more than three full-length albums under the belt.

Until Rebaelliun's dissolution (in 2002), the trio celebrated its most potent period, having released two studio albums, Burn The Promised Land (1999) and Annihilation (2001), via Hammerheart Records. They also played several tours - most of which took place in Europe - and shared the stage with Cannibal Corpse, Deicide, Vader and Behemoth.

In 2015 the original lineup decided to reunite and release its third and last album, The Hell's Decrees (2016), followed by a European co-headlining tour with Pestilence, alongside shows at Party.San Open Air (Germany) and Brutal Assault Open Air (Czech Republic). Unfortunately tragedy struck shortly after, and took the life of guitarist Fabiano Penna in 2018. Amidst all the hardness, remaining members decided to keep the band alive.

In 2020 Rebaelliun is ripe for a new album. The band is also gearing up to perform at Netherlands Deathfest (which have been postponed due to the virus outbreak) with more exciting news to follow.

Rebaelliun commented on the singing: "Last year, we started talking about a new album. With two new songs we got in touch with our previous label [Hammerheart Records]. The response was good, but not sufficient to our needs. After sending promo material to other companies and reviewing several offers, we decided to team up with the Polish label Agonia Records. Since our first encounter, we felt a good understanding, that reflects the band's needs. We're currently composing new songs. The energy is great and we are expecting nothing less than the best album of our career."