RUSH - Cinema Strangiato Film In Theatres Worldwide For One Night Only 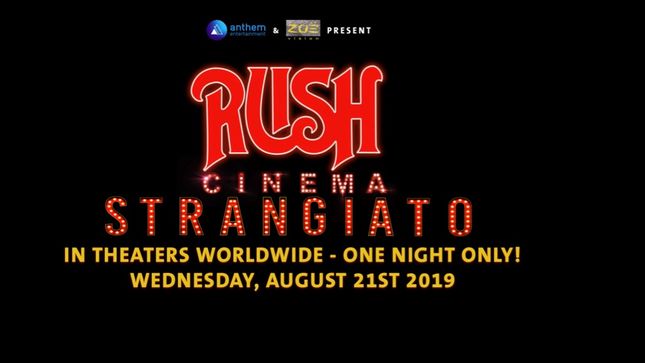 Rush have announced that on August 21, Anthem/Trafalgar will bring the first annual “Cinema Strangiato” to the big screen in movie theaters worldwide for one night only. This theatrical film experience will bring Rush fans together for a special look into R40 Live, see new backstage footage, special guests, and performances that you won’t want to miss.

Synopsis: The Holy Trinity of Rock returns to the big screen on Wednesday, August 21, when the first "Annual Exercise in Fan Indulgence" Cinema Strangiato brings Rush fans together in movie theatres worldwide. Featuring R40+, this global fan event will give audiences a special look into some of the best performances from R40 Live, including songs such as “Closer to the Heart", "Subdivisions", "Tom Sawyer" and more, as well as unreleased backstage moments and candid footage left on the cutting room floor.

R40+ also includes unseen soundcheck performances of the fan-favorite "Jacob's Ladder", exclusive new interviews with Tom Morello, Billy Corgan, Taylor Hawkins, producer Nick Raskulinecz, violinist Jonathan Dinklage and more. As a special bonus, fans will get a glimpse into the madness and passion that went in to the making of Geddy Lee's new book, Geddy Lee's Big Beautiful Book of Bass - featuring a brand-new interview from the man himself.

Tickets go on sale Thursday, June 20. Head to cinemastrangiato.com to sign up for more event information.