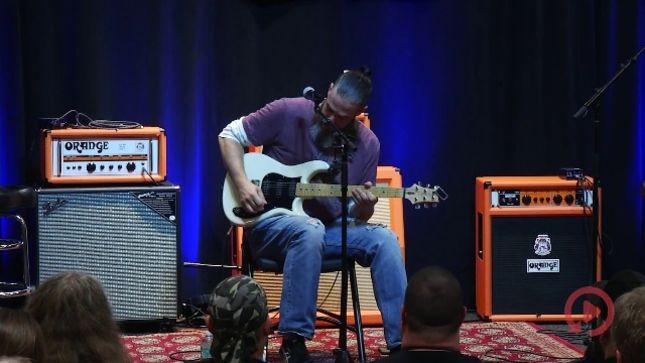 Saigon Kick guitarist Jason Bieler has released a new four song EP, The Grand Design. Check it out below.

Bieler recently announced a free guitar clinic, due to take place in Tampa in October, as only he can. Check out his invitation below.

"Does the world really need another guitar clinic? Another dude or dudette showing off 13 finger tapping in 72/32 time sig at 430BPM? No…damn it, NO! Why then, should you attend my clinic at Replay Guitar Exchange on Oct 17th... aside from the fact that it is one of the coolest stores on the planet and the clinic is FREE? Well, thanks for asking.

The time we spend together will be focused on how to build a career playing guitar, bass…or even worst-case scenario, drums :-), songwriting, production, and most importantly getting out of the bedroom both literally and mentally. How to not to be the 10 millionth YouTube guitar player to discuss economy sweep picking and the use of essential oils to increase knuckle flexibility.

Of course, we can do guitar stuff as well, talk gear, tone and more. I'll demo my Victory Amps, but I would like this to be about inspiring you to think, to get to the next level creatively and career-wise. No matter how fast you play there is a 4-year-old girl in Guam…even faster. If that is what you are about, awesome, and I wish you great happiness, but you probably don’t need to come out for this. On the other hand, if you are all about creating music, finding your own voice, playing live, recording, producing and getting to the next level, I think you are going to be chuffed to bits and I'd be happy to share what I know both the mistakes and the glory!

Hope you can make it out!"

For information on the guitar clininc and Replay Guitar Exchange in Tampa, FL, go to this location.

Bieler recently released the new four-song Things & Stuff EP, featuring an acoustic version of the Saigon Kick track "One Step Closer", which was originally recorded for the band's 1993 album, Water.