SEASON OF GHOSTS Vocalist SOPHIA ASLANIDES - "As Fans, You Have Incredible Power; Without You, No Event Or Artist Can Exist For Long" 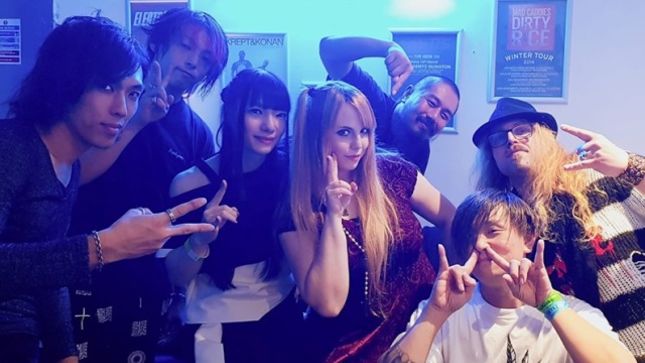 "Regarding Metal Matsuri a couple weeks ago, many people approached me asking why I didn't appear on stage with Blood Stain Child. I also heard from others that their friends told them they wouldn't attend the show unless I was announced as a special guest for BSC. That's all okay, but if you guys, as fans want something specific you must realise that you DO HAVE the power to claim it. Shows are essentially commercial events, so if the organiser is gonna make more money he will try to accommodate fan requests whenever possible.

How many of you sent an email to Orion Live or Blood Stain Child to ask for me to appear as a special guest? At the Necronomidol show several people came to me asking the same thing. I told them if you want it, ask for it and those in charge might listen.

As fans, you have incredible power; without you no event or artist can ever exist for long. If you raise your voice high enough and put effort into spreading the word, you can achieve crazy things. Understand and realise your power. You wanna see your fave artist at your city's convention / venue?ASK! Not them, but people in charge. And don't be lazy; things don't just happen randomly. It's called demand and supply. Everything works like that. Don't be a passive fan, be active and I can guarantee you're gonna have much more fun whatever you do, whoever you choose to support.