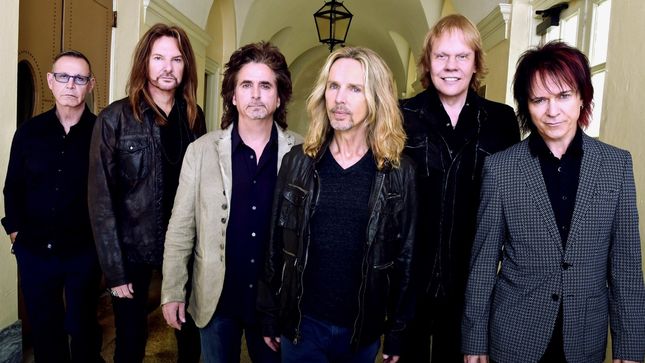 Styx invites fans for “Styx Fix” tomorrow, March 27, on their official YouTube channel. Styx will be streaming a live show recording along with exclusive photos and videos and an introduction from singer/guitarist Tommy Shaw. The show begins at 5 PM PT / 8 PM ET. Styx is also asking for donations to the band’s Rock To The Rescue organization. 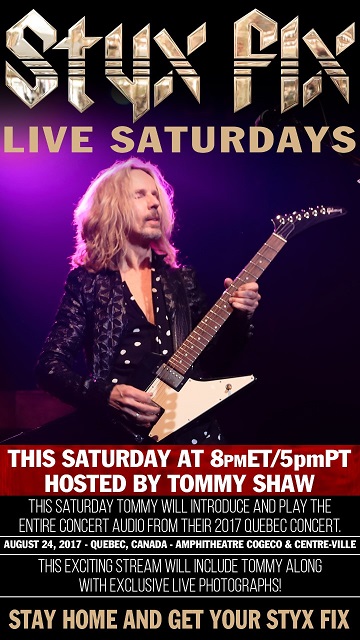 At each tour stop, Rock To The Rescue—spearheaded by Tommy Shaw’s daughter, Hannah and is a 501(c)3 nonprofit organization founded by the band, whose mission is to build strong, healthy communities through the support of grassroots organizations across the country--researches local nonprofit organizations and picks one to see if they are interested in volunteering to help the band sell $10 tickets for a drawing to win a signed Styx guitar at the shows.  They give these organizations a percentage of the sales as their way of supporting their cause and thanking them for supporting the band’s cause.

Rock To The Rescue was founded on the principle that our communities are stronger when we work together in mutual aid.  Having played thousands of shows in the last 15 years, Styx has been strongly connected with communities across the country. With local fans and community members making an effort to join in support of Styx, it is important to the band to actively participate in these communities as well. What makes Rock To The Rescue unique is that they work on a grassroots level with small groups, giving real support to real individuals who are creating positive changes in their communities. Rock to the Rescue is building initiatives in the areas of music education, health and well-being, disaster relief and aid, and animal welfare and rescue.

Rock To The Rescue originally started in 2001 as a result of the 9/11 terrorist attacks and is the brainchild of STYX singer/guitarist Tommy Shaw and REO Speedwagon singer/keyboardist/guitarist Kevin Cronin.  The two musicians brought together bands and artists such as Bad Company, Journey, Survivor, Kansas, Lynyrd Skynyrd and many others to be part of “Volunteers For America” concert events in Dallas and Atlanta that ultimately raised over $775,000 for victims of 9/11, as well as the Port Authority police department in New York City.

In 2014, Rock To The Rescue raised $10,000 for the Philadelphia Fire Department Local #22 Widows Fund at the “Soundtrack of Summer” show (with Foreigner and former Eagles guitarist Don Felder) in Camden, NJ on July 3, as a thank you to the local fire department for cooling down STYX’s burning crew bus the day before.  And in 2013, Rock To The Rescue hosted a sold-out concert with STYX, REO Speedwagon, Ted Nugent, Survivor, Richard Marx and Larry The Cable Guy, in Bloomington, IL at the U.S. Cellular Coliseum that raised $450,000 for victims of the horrible storms in Illinois.  Also in 2013, Rock To The Rescue presented the Boston One Fund with a check for $108,000 for victims of the Boston marathon bombings as a result of funds raised during the “The Midwest Rock ‘N Roll Express” tour with STYX, REO Speedwagon and Ted Nugent.

On November 19, 2015, Rock To The Rescue donated $25,000 to The Sweet Stuff Foundation to help victims of the Paris terrorist attacks. In honor of the musicians and crew who lost their lives in the attack at The Bataclan music venue in Paris where Eagles of Death Metal were performing, from that date through December 31, 2015, Sweet Stuff dedicated all money received directly to the surviving families of those who passed away, including that of the band’s merchandise manager, Nick Alexander. The Sweet Stuff Foundation was founded by Queens of the Stone Age’s Josh Homme, who is also a key recording member of Eagles Of Death Metal.