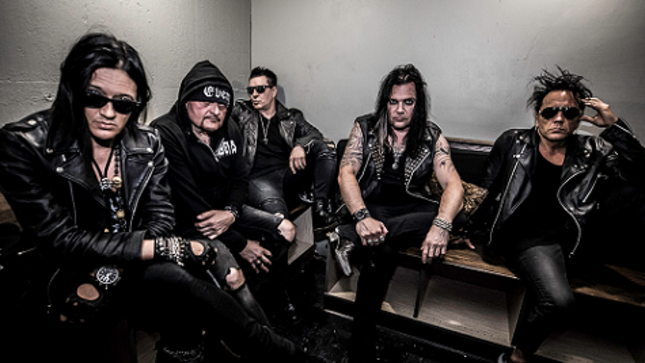 On July 26th, Finland's dark rockers The 69 Eyes will finally start the pre-order for their 12th studio album, due to be released on September 13th. Right in time for their 30th band anniversary, West End will see the light of day, so prepare for 11 up-tempo rock anthems full of heaviness, black memento mori moments and dark humor featuring several top notch guest vocalists including Cradle Of Filth's Dani Filth, Wednesday 13 and Beastö Blancö's Calico Cooper.

Today, the band have revealed the second trailer for their upcoming album - get a glimpse into the studio where the band recorded West End with their longtime producer Johnny Lee Michaels:

Singer Jyrki explains: “The second episode of making of the album shows how art is born only for the sake of art. It is not a job. It is closer to chaos and the bohemian lifestyle, no matter how many times you have done it before! That’s why it is called rock’n’roll.”

In case you missed the previous trailer about the album artwork created by the famous Finnish sculptor Jiri Geller, check it out below:

The Helsinki Vampires are ready for extensive touring and will soon embark on a road jaunt through Finland, before hitting the rest of Europe and Russia. Find the band's complete live itinerary here.