THE CROWN - "We Start Focusing On New Stuff Right Away"; Video Interview 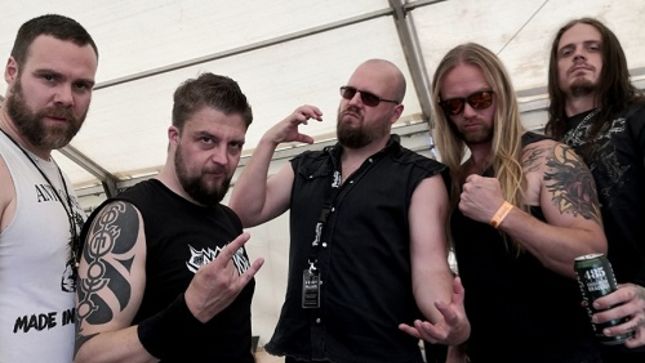 The Crown played their last show of 2019 on August 9th at Party San Metal Open Air in Schlotheim, Germany. However, that does not mean it's time for a vacation; quite the opposite actually, as rhythm guitarist Marko Tervonen explains to Ambross Mag in the video interview below. An excerpt, transcribed by BraveWords, reads as follows:

"We will start focusing on the new stuff right away because we are in a pretty luxury position; we have about 30 new songs. So, we just need to figure out what we're going to do with it. Should we rehearse all 30 and pick out the best ten, or should we release 30 songs? There's a lot of thought. But step number one is to get into the rehearsal room and start really playing the songs, and get a feel for it."

"There was a period after the Cobra release, because it was a very positive experience; it gave us a lot of energy. Magnus (Olsfelt, bassist) wrote 20 songs, I wrote five songs, Robin (Sörqvist, lead guitarist) has a few songs. There's a lot of material now that came from a very inspiring period. I'm looking forward to start rehearsing it, and topping Cobra Speed Venom. Of course we need to do it."

The Crown has also issued the following statement:

"We would like to thank all of you that came and supported us during the Cobra touring cycle. The album has been received with open arms by all of you and the shows has been amazing. So thank you all a million times. We will start working with new songs in a couple of weeks and we will try to make the best possible album ever. We celebrate 30 years next year but we are still very hungry and we still love to play extreme music so see you all next year for the next chapter of The Crown. It will be a blast celebrating with all of you. Cheers!!"