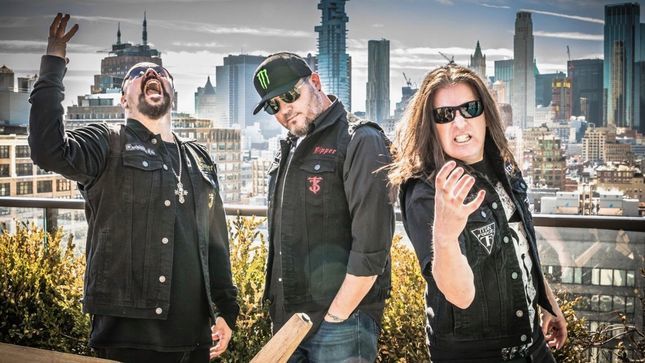 The Three Tremors - Tim "Ripper" Owens (Judas Priest, Iced Earth, Dio Disciples), Harry "The Tyrant" Conklin (Jag Panzer, Satan's Host, Titan Force), and Sean "The Hell Destroyer" Peck (Cage, Denner/Shermann, Death Dealer) - will be embarking on a US tour in 2020. In anticipation of the tour, they have released a video for "Sonic Suicide" from their self-titled debut.  It touches on the dangers of censorship in a variety scattered images set in a backdrop of some killer live footage from their 2019 USA tour.

With regards to the upcoming tour:

Harry "The Tyrant" Conklin - "We had a great time on the last US tour we did. We are changing up the set a little bit for this upcoming run and throwing some cool new surprises in. I think the people are going to love it."

Tim "Ripper" Owens - "I'm really looking forward to hitting some of these States that we missed last time and bringing our show to places like Texas and Florida, that we have not played yet."

Sean "The Hell Destroyer" Peck - "The album has been out for a while now, so people are more familiar with us as a band and the songs. We are following it up with the solo releases now so these new shows will be supporting that release. We will have some really radical new merchandise to go along with it, which I cannot wait to see. I love it that we are pounding America again and bringing this one of a kind metal experience to new cities as we expand our reach and get back to pounding the anvil!"

Ticketing links for US dates can be found here.