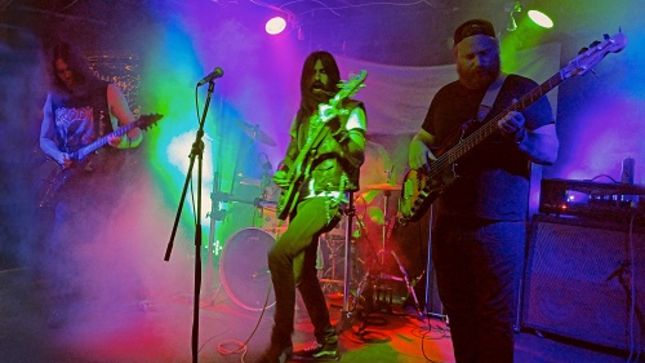 Possessed Steel are a four-piece traditional heavy metal band from Toronto, Canada. Formed in 2010, they started by playing small venues and house parties, and through the years became more and more dedicated to finessing their sound and ideas. They released a five-song rehearsal recording that same year, and after a steady stream of shows, the band crystallized their sound on their self-titled EP in 2014.

After a year-long hiatus - where they said they'd break up "forever," but didn't - the current lineup played together for the first time in 2015, playing the old EP from front to back and feeling they had perfect chemistry. From that day forth, Possessed Steel as we know today was formed, and the band went on to release their second EP, Order Of The Moon, which featured some older songs expanded upon and slightly rearranged.

As they expanded their sound and honed their creativity, they set their sights on writing their first-ever full-length, leading us to now. For a full year, Possessed Steel have been working harder than they've ever worked - recording, writing and releasing a one-of-a-kind concept album of epic proportions, Aedris.

Aedris takes us across a prophetic journey, which unfolds into a succession of mystical songs taking place in an enchanted world. The goal is for Aedris, the last of kin in a long ancient bloodline, to choose to heed a prophecy of ruin - or to ignore it - and each song is a chapter in his story.

Musically, Aedris is a well-crafted, refreshing mix of epic heavy metal and Canadian-style progressive thrash with poignant vocals, sometimes soul-wrenching screams - but overall, it has incredible riffs, otherworldly acoustic parts (think Sacred Blade), and over-the-top solos. One thing that could be said about Aedris is that it is more than an album; it is entering another world. It makes us travel into a parallel universe. It sounds and feels original, and it is the type of record that we can listen to over and over again and discover new things every time.

Join Aedris, and follow his quest to fulfill his destiny as the album sets into a somber musical voyage, which sets sail on November 30th via Temple Of Mystery Records.

In the meantime, emjoy a lyric video for the brand new track "Spellblade". Cover artwork, courtesy of Tamara Comas, and tracklisting follow below.