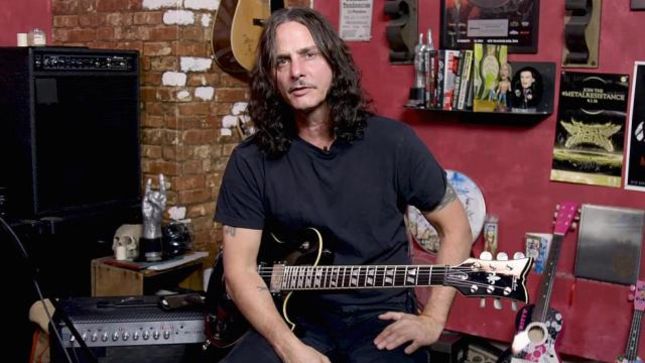 In the clip below, Kenny Hickey of Type O Negative and Silvertomb plays the first guitar riffs he learned and wrote, and shows how The Munsters influence the Type O Negative song "Gravity" from The Origin Of The Feces.

"After a long night in the studio wrestling with key changes and heavy riffs I became frustrated and picked up my acoustic and this song just sort of spilled out at 3 AM. It was completed in around 15 minutes. I guess it was just what I needed: a straight up simple rock song to put my feet back on the ground. I decided to end the record with it to refresh the ear after 36 minutes of dirge and weighty tuned down sludge, so it actually shares with the listener the state of mind I was in when it was written. It’s a song about wasting time and emotional energy over the things you’ve lost in life and the things you could never have."

Silvertomb's debut album Edge Of Existence explores Kenny Hickey’s personal struggles with addiction, love, and suicide, and the death of his singer and frontman Peter Steele in 2010 and subsequent disbandment of Type O Negative.

The album cover art for Edge Of Existence was conceived by Joe James and Kenny Hickey. The idea was to capture the classic black light, Sci-Fi poster art popular in the 1970’s. The central skeletal figure on the front cover was modeled after the famous images of the ascension of Christ, with Hickey posing for the image and the artist Rodrigo Canteras sketching the image of the robed skeleton over his proportions.