UNLEASH THE ARCHERS Vocalist BRITTNEY SLAYES - "When It Comes To Music, Even If You Think It's The Worst Thing Ever, It Probably Helped Someone Feel Better Or Battle Some Hardship In Their Life" 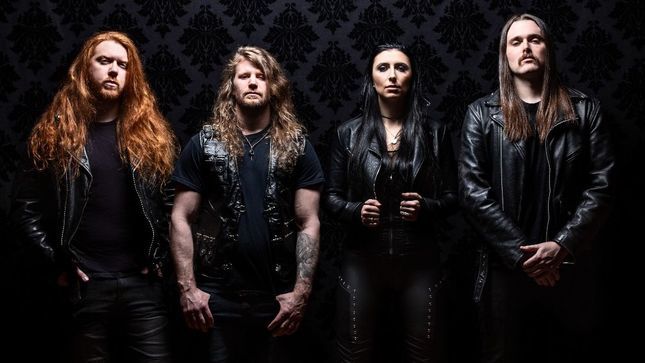 During a conversation with Ultimate Guitar's David Slavković, members of Unleash the Archers - singer Brittney Hayes and guitarists Grant Truesdell and Andrew Kingsley - talked about the band's new album, Abyss, the gear they're using, the state of the music sphere amidst the ongoing pandemic, and more. Following is an excerpt.

UG: Brittney, your voice on this record is just impeccable, as usual. Was there any song in particular on Abyss that was the most challenging to record?

Brittney: "Thank you! There were definitely parts that were more difficult than others, but I think the song that probably had the most was 'The Wind That Shapes the Land.' That song is one of the longest on the album and had the most diversity. It was a challenge to write and a challenge to record, due to the fact that it goes through so many emotions and there are a lot of dynamics to it. Softer parts can often be hard to nail, but also the super-powerful parts in the middle were arduous as well. Funnily enough, it turned out to be one of my favorite tracks on the record so I guess it pays to apply yourself!"

UG: When it comes to music in general, are there any "guilty pleasures" that you guys are into?

Brittney: "Personally, when it comes to music, I don't think there is such a thing as a guilty pleasure. All music contributes to society in some way, and even if you think it's the worst thing ever, somewhere out there it probably helped someone feel better or battle some hardship in their life so, I think all music has a place in the world. That being said, I think it is extremely important to continue to find new music, and search to discover new genres and artists, because if you walk into a conversation about music and the only bands you tout are from the '90s then you might want to think about your 'guilty pleasure' albums and realize they might actually the only albums you know (laughs)."