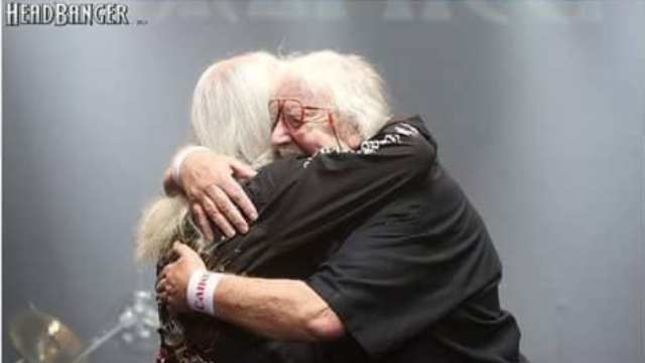 Drummer Lee Kerslake has died at the age of 73. Kerslake, who played on several Uriah Heep albums as well as Ozzy Osbourne's Blizzard Of Ozz and Diary Of A Madman, passed away after a lengthy illness battling prostate cancer.

Uriah Heep guitarist Mick Box has paid tribute to Kerslake, posting the photo above along with the following message:

"Lee was one of the kindest men on earth. As well as being a brother he was an incredible drummer, singer and song writer! He had a passion for life bar none and was much loved by the fans, as well as anyone who crossed his path! Rock in peace my friend and say hi to David,Gary, John and Trevor for me! This picture says it all!"

Kerslake was a member of Uriah Heep from 1971 - 1979, then again from 1981 - 2007. He first appeared on their 1972 album, Demons And Wizards, and went on to record nine studio records, as well as a live album, with the band before departing in 1978 after the Fallen Angels tour. He also played on David Byron's and Ken Hensley's solo albums, among other efforts during this period.

After achieving extreme commercial success with Ozzy Osbourne in the early '80s, Kerslake rejoined Uriah Heep in time for their Abominog album, regarded as a comeback album for the band by many critics. He would remain with the band until January 2007, appearing on an additional six studio albums, bringing his total contribution to Uriah Heep's output to 17 studio albums, along with several live records.