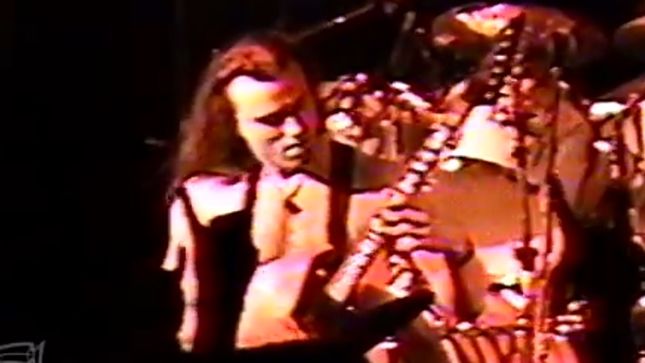 Robbs Metal Works has uploaded some truly classic footage of Death at the Nocturne in San Antonio, Texas from December 11th, 1998. The band was on tour in support of their latest release, The Sound of Perseverance. Robert Chavez talks about the history:

“This video includes ALL the footage I have of this show - almost 30 minutes. I wanted to release it all at once worldwide. I did not edit or cut any of the video out to make it pretty; so there are instances of shaking, blackness, movement. Plus, I wanted to share Chuck talking & tuning up between songs. The audio on this video is pretty damn good. They were SO tight as a band. It's almost a miracle that it exists. I recall at that time taping a live show was a big 'no, no'; cause bands and management didn’t want people profiting from VHS sales. In fact, that week I recall the label's publicist telling me 'no'; but despite the fact, that night I took the liberty of asking Chuck myself and he said to go right ahead. Neither of us could have imagined how important this video would eventually be to the metal history of San Antonio and his own legacy.”