WITCHERY To Release I Am Legion Album In November; “True North” Music Video And Single Released 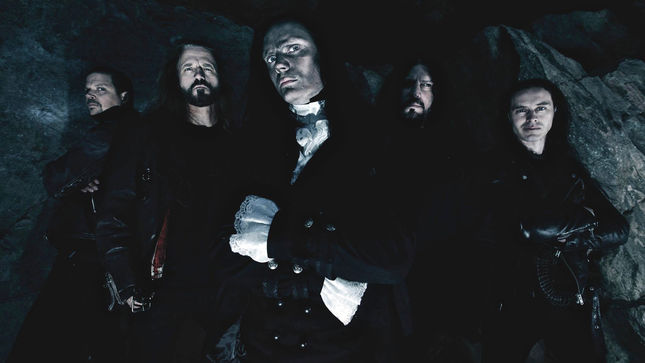 Following up last year’s In His Infernal Majesty’s Service album, Swedish blackened thrash metallers, Witchery, have announced the release of their new album, I Am Legion, for November 10th via Century Media Records. Pre-order the new album here.

As with the previous album, I Am Legion was created in the Witchery lineup consisting of Angus Norder (Vocals), Jensen (Guitar), Rickard Rimfält (Lead Guitar), Sharlee D’Angelo (Bass) and Chris Barkensjö (Drums). The album was also produced and mixed by Daniel Bergstrand at Dugout Studios (Behemoth, In Flames, Meshuggah) and comes packaged in powerful artwork by Andreas Diaz Pettersson, which can be seen below.

The album’s first single “True North” is being launched today with a video produced by Niklas Sundin / Cabin Fever Media. Watch the video below, or stream the track via Spotify. A brief trailer for I Am Legion can also be seen below.

Witchery guitarist Jensen checked in with a comment about the upcoming album: “The first few days after the release of “Nosferatu" (the first single from 2016's In His Infernal Majesty's Service album) I was quite taken aback. There had been so many years between the releases of Don't Fear The Reaper and Witchkrieg (4 years) and then an additional 6 more years between Witchkrieg and "In His Infernal Majesty’s Service that I hardly thought anyone remembered Wtchery anymore...

“We got our s*** together for “IHIMS” in order to celebrate the band's 20th anniversary. We wrote new songs and got a few new members so we could make the album happen and have it released in 2016. But that was the goal; to merely celebrate the band's 20 years of existence. Then, after “Nosferatu” was released, this massive wave of appreciation started to surface. When the full album dropped in November 2016 we experienced a surge of positive feedback on the rest of the album as well. I mean, we all loved the album and knew it was good, but we were thrilled to see that also other people heard what we heard; that it was a great album and that this line-up had both the chops and riffs needed, displaying them with an enthusiasm and bravado perhaps not seen since maybe the early days of the band’s existence!

“This feedback of positive energy set things in motion within the band. Remembering our promise from somewhere around the release of the Dead, Hot And Heavy album that we would put out two albums a year (youthful hubris, anyone?), we thought to ourselves: "Let's try to put out a new album within a year of the release of IHIMS". Said and done.

“So here we are. It's August 2017, and we are very happy and immensely proud to announce I Am Legion, the new full-length follow-up album to 2016's “IHIMS”, scheduled for release on November 10th! With I Am Legion having the same line-up, the same studio (Dugout Studios) and the same producer (Danne Bergstrand) as on “IHIMS”, you just know that this will be yet another sonic fist-to-the-face riffage offering! We think “IHIMS” is a great album, but we also think I Am Legion takes everything up a notch or two!

“Those of you who saw us play at Wacken a few weeks ago got to hear the world premiere of the song "True North", which will be the first single from the new album. We are very excited about I Am Legion and we hope this release shows that Witchery, albeit after 20 years of existence, isn't going to fade away. On the contrary, Witchery is more likely entering the most productive phase yet in the band's career!”

Jensen continued by adding the following comment about the album’s first single: “‘True North’ is somewhat of a different song compared to what Witchery usually puts out. Maybe that's why we made it the first song on the new album? Regardless, it's a song that we in the band all really like and that most likely will become a regular in our live set."