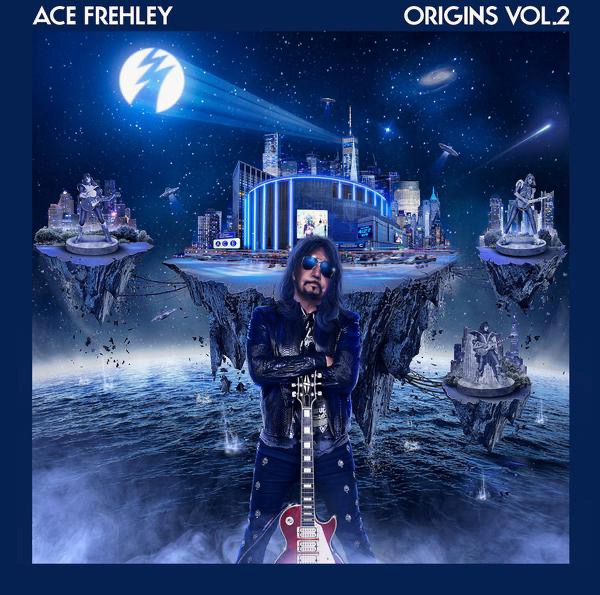 I don’t think many expected Ace Frehley to become the most prolific member from KISS. Always derided for being lazy (especially by Gene Simmons and Paul Stanley), the original Spaceman has brought forth a consistent amount of new music since his return with the incredible Anomaly in 2009. While the quality of his releases can be argued, it’s refreshing and exciting looking forward to something new, especially considering when his former band’s latest output is from 2012.

In regards to being “new”, Frehley has cobbled together another collection of covers, which appears is going to be a trilogy of albums. Origins Vol. 2 sees the guitarist bringing on guests to cover songs from his youth and the song choice is much better from Vol. 1 and it was a smart idea to lay off covering the band that gave him fame, aside from closer and bonus track “She”. With a much fuller sound, the production job of Vol. 2 is miles better than previous Ace albums, particularly with the drums. Tinny, weak drums have been a frustration, especially on 2018’s Spaceman, but it has been largely rectified. There’s also a crisp, clean bass and while Ace’s vocals have never been his strong suit, he sounds as good as one could expect of a guy nearing 70. Is there some studio trickery at work in some parts to make him sound better? Sure, but it doesn’t detract from the overall experience. “Space Truckin’” was a smart choice as first single, amplifying Ace’s humor with references to his personality and has a complete thump to it, complete with a Hammond organ solo. An effort to truly be proud of, the rendition of Humble Pie’s “30 Days In The Hole” with Cheap Trick’s Robin Zander is perfect, single quality. Zander’s vocals are as strong as ever and the guitars are filled with swagger and exuberance. Bringing on master axman John 5 for Cream’s “Politician” and The Beatles’ “I’m Down” was a smart choice as the two play well off each other and the former has a very distinct, flawless riff that is right up Ace’s alley while “I’m Down” is a more raucous version of the Fab Four’s original.

Updated versions of ‘60s classics from Paul Revere & The Raiders (“Kicks”) and The Animals (“We Gotta Get Out Of This Place”) are treated with respect and are a rockier, heavier version from their original counterparts. These very catchy tunes add some guitar flair and are sneakily among the stronger tracks presented. Lita Ford provides vocals on The Rolling Stones hit “Jumpin’ Jack Flash” and while musically efficient, not really digging the added “f-bombs” thrown in and while it’s cool another former KISS guitarist, Bruce Kulick, appears on Jimi Hendrix’s “Manic Depression”, it’s unfortunately one of the least memorable.

It’s funny hearing another dose of Mountain’s “Never In My Life”. Such a rich and powerful riff, this song was also dressed up on BPMD’s American Made record, released earlier this year. American Made ties in with Origins Vol. 2 very well actually. BPMD performed “metalized” versions of ‘70s rock tracks and with Frehley tackling cuts from around and before that time period, listening to them back to back makes for a fun experience. And in the end, that is what it’s all about – having fun! It’s easy to hear Ace was having a good time with the songs and more importantly Vol. 2 is a better executed and better thought-out than its predecessor.