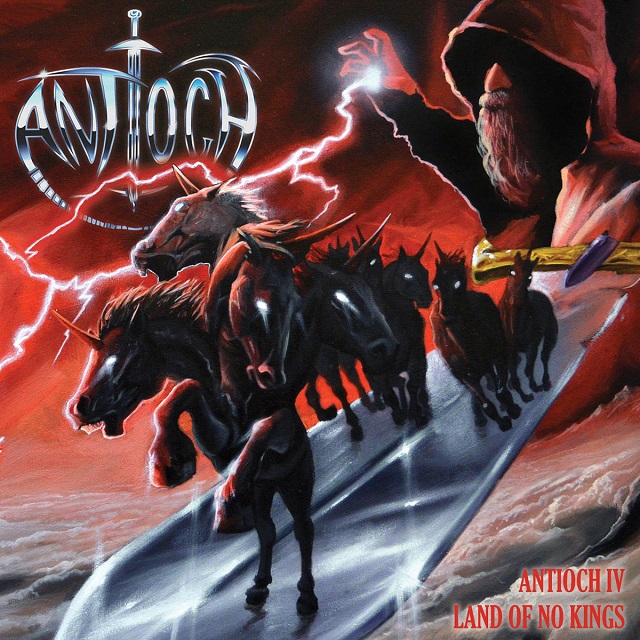 Hard working Canuck foursome, releasing their fourth disc in just six years of existence. Aggressive, traditional metal, with high pitched vocals, is the name of the game, with the occasional nod to their mentors. While “Screams In The North” begins as something of an atypical dirge (think Paradise Lost), the band quickly ups the tempo and shifts to what they do best. Even more infectious, “Beware The Black Hand” sees vocalist Nicholas Allaire adopt a James Rivera style. Speaking of the Mexican Dio, he sang on the last Malice platter and the title track wouldn't be out of place on either of their ‘80s releases, although Allaire scrapes the stratosphere more frequently. In some ways, Antioch suffer the same fate as those Californians, failing to truly go full out. The lone exception being the clickety-clack of “Dungeon Runner”, which is vintage Judas Priest, down to the high pitched, “Painkiller” screams. More like this one, please! Even a spirited, twin guitar break can't save the “Hard On The Rock” follow-up, which is the runt of the litter, a commercial mid-tempo clunker. Attempted Dio-esque ballad “The Man Who Made The Mountains” is a change of pace, shame it's on the back of the aforementioned weak spot, creating a bit of a lull halfway through the running order. Piercing vocals of “Thunder In Hell” (not as vicious as the title implies) gives way to mid-paced “Gargoyle” (minimal/repetitive lyrics and good guitar passage). Speaking of six-strings, they're all over the pepped up “One For The Grave” finale.

The digital download contains nine originals, while the CD (available at shows, or directly from the band), features four cover/bonus tunes: Ramones, Blue Oyster Cult, Alice Cooper and (surprise, surprise) Judas Priest, if you're into that kind of thing.