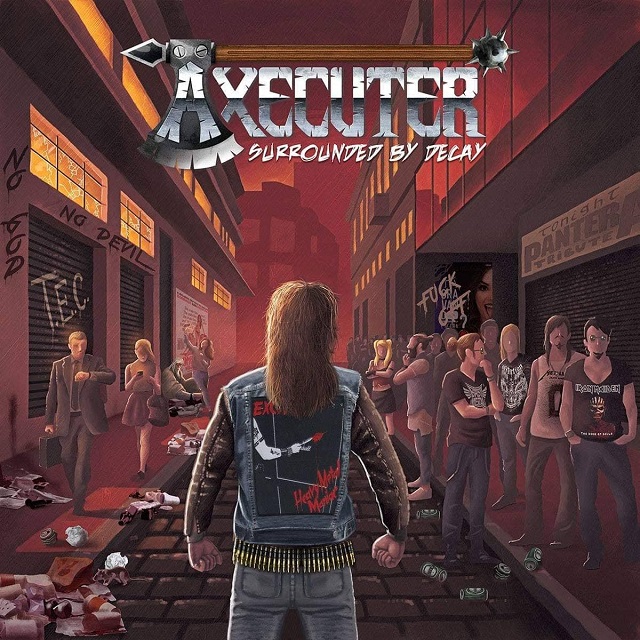 Releasing a handful of 7”, splits and cassettes since '11, this is just the second studio effort from these Brazilian thrashers, A Night Of Axecution reviewed last year. Paradoxically, the title cut begins with street sounds, as someone walks inside and closes the door behind them, then proceeds to a mid-tempo instrumental. Guess it's big picture symbolism, the music a respite from the insanity of the outside world.

First proper track “Rise And Fall” not only ups the ante, in terms of speed/intensity, but adds gruff, snarling (Anglicized) lyrics, the occasional shriek and some intricate bass work. Showcasing buzzsaw riffs, “Separate Ways” alternates with more restrained sections. A galloping “Darkness In Bottles”, the nearly acoustic begun “Dying Source” and “Metal In Wrong hands” are all well-structured examples of Axecuter's craft. For a step back into yesteryear, there's swirling guitar “Collecting Enemies”, the sort of raw, rudimentary early Slayer sound for which many South American thrash/death metal fans/bands have an affinity. “Darwin Was Right” (great title!) has a bit of a progressive edge (musician show piece), veering slightly towards traditional metal. Not sure what happened (different session?), but for the latter third of the platter, Axecuter seem to have had a change of heart, foregoing thrash and locking into a slower, mid-tempo sound, including the start-stop, hardcore influenced “Spend The Dollar”. Some spirited playing on 7:04 “Passage Back To Hell” closer, including the aforementioned technical bass player. Growth, but still not there, yet.