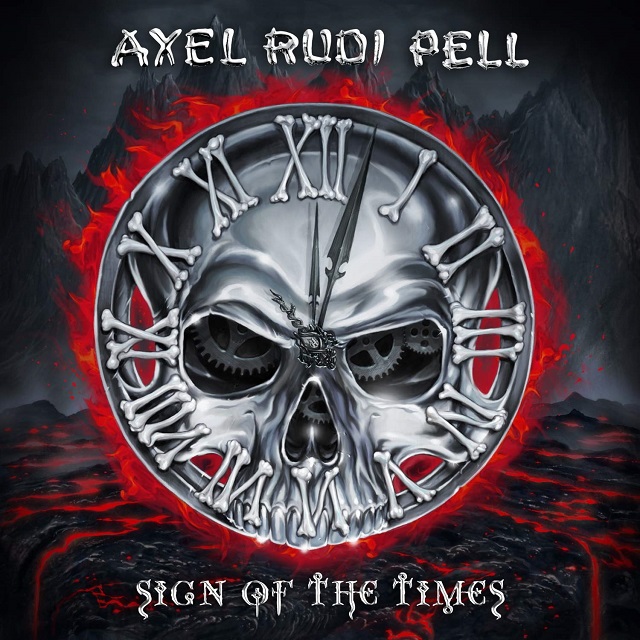 Never get tired of the gray haired German guitar virtuoso!

Another intro, but once "Gunfire", the first proper tune kicks in, Pell's fingers are blazing and the keyboards are right behind, just like his mentor Ritchie Blackmore, on Rainbow's "Kill The King" (where drums were the accompaniment). Aside from the quick, precise picking, there's still time for a tasty solo spot. ARP (as the band calls themselves) is not known for headbanging anthems, but this certainly qualifies. One of the best Pell tunes and for someone with 17 studio albums, as a solo artist (and at least that many more, when live efforts, compilations and Steeler are included), that's REALLY saying something! While the lone speedster, it's not the only upbeat number in this latest batch.

Pell credits longtime singer Johnny Gioeli, who cut his teeth in Hardline (following a stint, along with his brother, in ‘80s Sunset Strip act Brunette) with an increased role this time around and poppy "Bad Reputation" certainly feels like something from that vaunted era. Maybe a Bon Jovi leftover? The keyboard begun title track seems to reuse the sound-effects intro, before settling into a trademark, mid-tempo APR cut, with cannonading drums, courtesy of Bobby Rondinelli (himself a veteran of Blackmore's troupe). Energetic, head nodding (or is it fist pumping?) "The End Of The Line" revs up, right before the requisite ballad, piano augmented "As Blind As A Fool Can Be". Is that a little bit of recurrent scratching, which kicks off and reappears throughout second single "Wings Of The Storm"? A cappella start to "Waiting For Your Call", while there's a little jangly reggae to begin keyboard laden "Living In A Dream", which recalls ARP's "Edge Of The World", albeit a tad less aggressive. The disc concludes with "Into The Fire", a slow-to-mid-paced effort that allows Pell a rare moment of extravagance. Across the nine tracks, solo spots are kept in check, seemingly preferring to concentrate on the songwriting craft. If you don't know ARP by now, what are you waiting for?