CARNAL AGONY - Back From The Grave 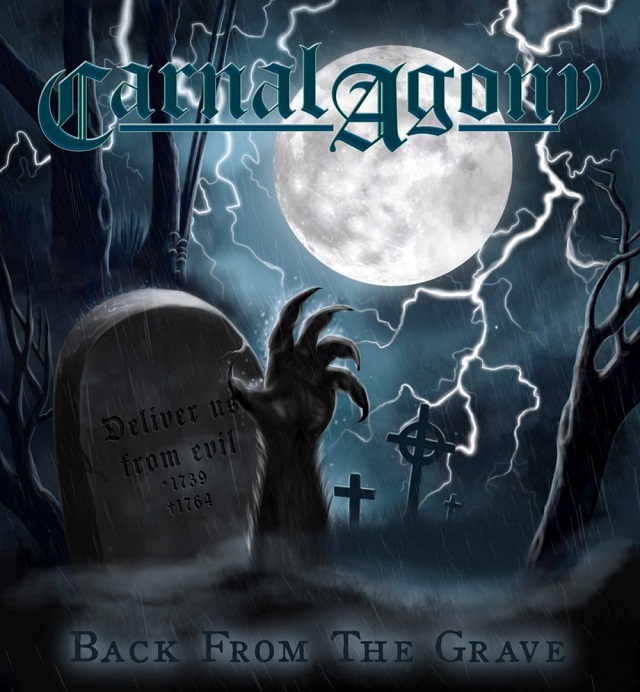 A group of Swedes who are the second-tier musical bastard child of Powerwolf (werewolf sexuality), Lordi (PG-rated, cartoon horror/Halloween themes) and a hint of countrymen Sabaton's infectious power metal anthems. Judging from the campy online videos, they've got a long way to go, in order to be a viable live act, but this review is only about the music. However, a clip featuring a kung-Fu showdown, where the undead antagonists give each other the finger (!) is only fitting for lyrical takes like synth-poppy "Love Will Tear You Apart":

“I'm a main course in a nocturnal feast, a sex toy for a deviant beast.
If I do what I'm told, I'll never grow old.”

Or the tongue-in-cheek chorus (and probably future, back-of-t-shirt) catchphrase to "Werewolf Of Steel": “(He's a) hideous creature with sex appeal.”

It all begins innocently enough, the first tones of instrumental/intro "The Rebirth" are synth and acoustic guitar, quickly joined by rasp of military snare drum, before it segues into voice-over title cut. "Luna" is an acoustic tinged love ballad, with a Celtic flare, while fist thrusting "For The Horde" gets the blood pumping. Strong syncopation in "Bane Of The Light" as "Raise The Dead" (no, not an Overkill cover) offers the most grit, in terms of musical intensity and vocal gruffness. Can't escape the otherwise omnipresent 8-bit video game guitar solo though. Disc ends much like it began, a 55 second, voiceless outro (paradoxically entitled, given its position in the running order) "The Ascension", a soothing, folky strum of guitar.