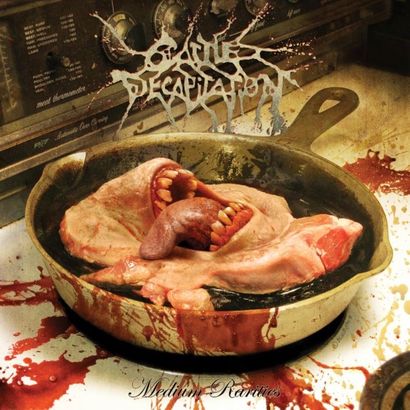 34 minutes of old/rare Cattle Decapitation material actually sounds super appealing to me; package it with an insane Wes Benscoter cover and I'm sold. I love the very early material, the band absolutely embracing gore-grind and running with it, with barely any of the songs that make up the first half of this release cracking the one-minute mark. Even still, one can hear the degree of musicianship these guys had way back then, the goregrind structures unable to hide the fact that Cattle Decapitation are shredding hard on this early material.

There's a pleasant amount of cohesion here, the newer and more sophisticated material working just great beside the less-than-one-second “The Recapitation Of Cattle”, for example, somehow, everything adding up to a great Cattle Decapitation LP, one that manages to show more sides of their personality than an album of new material in 2018 would, which is kinda cool, the only side of this band's lovable personality not coming through much here being the melodies, although they shine through in the music in the excellent “An Exposition Of Insides” and in music and vocals on “No Light And No Life”.

Like I say, basically a great Cattle Decapitation album, one that walks the listener through all eras and aspects of the band and their sound in a concise 34 minutes, the addition of the earliest stuff adding a great dose of variety.