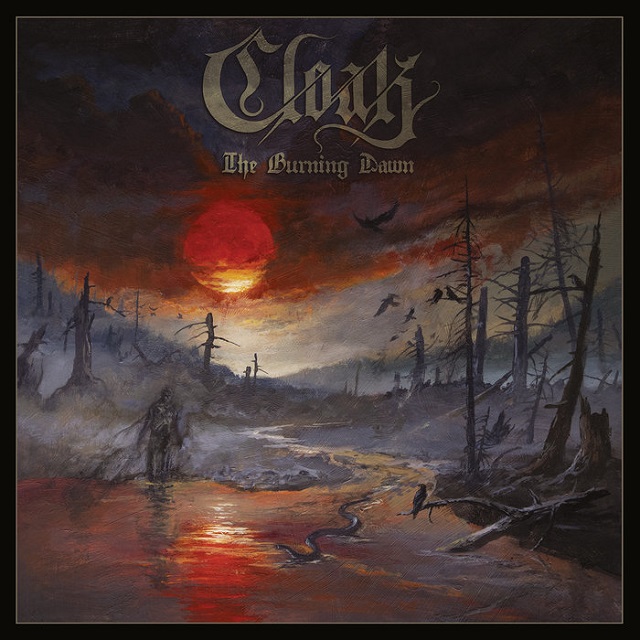 There’s something special brewing in Atlanta. Black ‘n’ rollers Cloak revealed their debut in 2017 and are now back with their second offering. These lads are going to remind a lot of listeners of Tribulation and also In Solitude, but while that rock ‘n’ roll feeling is apparent, there are doses of doom, Gothic and traditional metal in the waters. Cloak isn’t here to pummel the inhabitants of The Burning Dawn with blistering tempos and chaotic song structures; they instead use atmosphere and brooding techniques to subdue the listeners.

The growling vocals of Scott Taysom lead the way as tracks weave in and out of dark and horror laded music passages. There is an overall sense of gloom that colors the album in marbles of gray. “The Cleansing Fire” roars in after a bleak and burgeoning instrumental intro, “The March Of The Adversary”, and the riffs keep on hitting all the right notes and is backed up by the controlled drumming of Sean Bruneau. Don’t worry, the drumming lets loose in calculated parts of the record, but it’s all about maintaining that Gothic atmosphere and rhythms. There is also an ounce of commercial viability to these guys as a traditional structured track like “A Voice In The Night” is capable of attracting new listeners as it holds a clean solo, a vibrant acoustic passage, and killer guitars. The instrumental “The Fire, The Faith, The Void” shows rather a Maiden-ish quality and provides a different glimpse to what Cloak is capable of. The upkeep of interesting musical passages and the melancholic vibe of these guys is maintained throughout and demands repeated listens, because chances are you'll something different that’ll pull you in. An impressive effort!